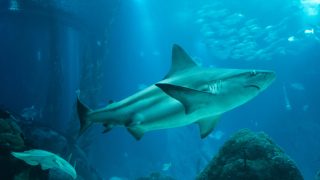 Fins or Fur — How the Law Differs

Many were horrified when they saw the brutal video of a shark who was caught and dragged behind a high speed boat that surfaced on social media in July. The three boaters laughed as the helpless and injured fish slammed against the rough water as he was dragged behind the boat by his tail.

The Animal Legal Defense Fund immediately reached out to the local law enforcement and offered our full support — and applaud the Hillsborough County State Attorney’s Office and the Florida Fish and Wildlife Conservation Commission for bringing animal cruelty charges against the three offenders.

These charges leave no doubt that the mistreatment of an aquatic animal can be taken seriously — while also raising important questions concerning these creatures’ treatment under the law.

A conservative estimate is that one trillion fish are caught and killed for food or sport in the wild each year. It is now more or less indisputable that aquatic animals like fish feel pain and suffer as other animals do but have fewer legal protections.

The federal Animal Welfare Act does not protect fish (or birds, farm animals, rats and mice bred for labs, and reptiles, among others). Fish are also not included in the Humane Slaughter Act or federal laws governing the treatment of animals used in research; not only that, but fish are not counted in the United States Department of Agriculture’s yearly report on animal usage in labs despite the fact that they make up an estimated seven percent of animals used in labs.

A number of states have language in their animal cruelty laws to exempt fishing as legally permitted (along with other “regular” animal-harming activities like hunting, biomedical research, and pest control).

As the shark case shows, though, when cruel behavior toward fish violates an animal cruelty statute and community norms, it is possible for charges to be brought.

Like other states, Florida’s animal cruelty statutes neither specifically include nor exclude fish. Fishing is such a major industry for the state that Florida prides itself as the “fishing capital of the world.” It is even legal to “harvest” some types of sharks. Fishing is regulated and overseen by the same government agency, the Florida Fish and Wildlife Conservation Commission, that brought charges against the shark torturers.

Commission chairman Bo Rivard said in a statement, when the charges were announced in December, that the shark dragging resulted in charges because it was so shockingly cruel; so far outside the range of usual behavior toward animals. All three of the men were charged with two counts of felony aggravated animal cruelty. Two of the three face additional misdemeanor charges.

“As we’ve said since this video and other images came to light, these actions have no place in Florida, where we treasure and conserve our natural resources for everyone,” Rivard said. “It is our hope these charges will send a clear message to others that this kind of behavior involving our fish and wildlife will not be tolerated.”

While the shark case is unusual, this is not the only example of legal protection for aquatic animals. For example in early January, Nevada became the 12th state to ban the sale of shark fin soup, and other products made from sharks, or the bodies of a number of other animals. These bans are generally enacted because the way the fins are procured —  by catching the sharks, cutting off their fins while the animals are alive and then throwing their bodies back into the ocean — is so unmistakably cruel, as well as for conservation reasons.

“The practice of cutting the fins off of living sharks and dumping (the carcass) back in the ocean is not only cruel, but it harms the health of our oceans,” Gov. Jerry Brown said in a signing statement, when California enacted its ban in 2011.

The Center for Animal Law Studies, which is a collaboration between the Animal Legal Defense Fund and Lewis and Clark Law School, started the Aquatic Animal Law Initiative last year — a first of its kind enterprise to focus on issues relating to the legal protection of aquatic animals.

But legal protections for fish — in statute and enforcement — are as yet still unusual.

“The number of fish killed each year far exceeds the number of people who have ever existed on Earth,” writes Ferris Jabr, in a thought-provoking recent piece in Hakai Magazine. “Despite the evidence of conscious suffering in fish, they are not typically afforded the kind of legal protections given to farm animals, lab animals, and pets in many countries around the world.”

The schism makes a little more sense in the context of animal law’s evolution as a whole. We are still working within a legal system that considers animals to be mere property. Little by little that is beginning to change.

It’s happened less with aquatic animals than land based-creatures thus far, yet there have been advances in this arena, too. Here’s proof: Three men in Florida, the fishing capital of the world, are facing serious criminal charges for how they treated a shark.