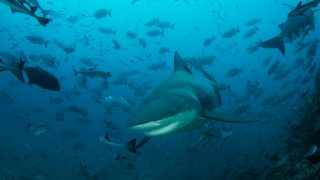 World Oceans Day, June 8th, is a global day to honor, help protect, and conserve the world’s oceans. We can all do our part to help the ocean’s inhabitants by not eating them and fighting for their legal protections.

Globally, the total number of wild and farmed finfish who are killed every year is in the trillions. Hundreds of thousands of other animals, including sea turtles, whales, dolphins, and sharks, are caught and killed unintentionally as bycatch while fishing.

Fish deserve to be included in our circle of compassion. The evidence of pain perception in fish strongly suggests that they experience pain similarly to other vertebrates, such as dogs and cats. Their perception and cognitive abilities frequently match or exceed other animals, even nonhuman primates. Fish can learn and remember complex information, which means they are capable of suffering.

When fish are caught from the wild, some are crushed by the weight of fish in the net. (Some trawling nets are so large that they can hold 13 jumbo jets!) Fish suffer decompression injuries when raised from deep water, including bulging eyes and burst internal organs. Fish are snared by their gills with nets and spiked with hooks (sometimes for hours or days). They are also impaled on hooks to be used as live bait. Fish caught from the wild are routinely killed through live gutting, which can take up to an hour to cause unconsciousness, and asphyxiation in air, which can take up to four hours to cause unconsciousness.

With the dire state our oceans are in, we must question whether they can sustain our appetite for seafood. Between the effects of climate change, ocean acidification, and oxygen depletion (which cause ocean dead zones), an unprecedented marine species extinction has already been triggered. Aquaculture won’t be able to save wild fish populations. Fish farms actually increase the number of wild-caught fish because many farmed fish are fed fishmeal (which is made from wild fish).

In the US, fish killed for consumption most likely have no legal protections. They are not covered by the federal Humane Methods of Slaughter Act, 28 Hour Law, or Animal Welfare Act. We need to regulate fishing methods, the equipment used, and farming and slaughter methods to decrease the suffering of fish. We could also decide not to consume them, speak out against the cruel fishing industry, and advocate for a world that protects all animals.