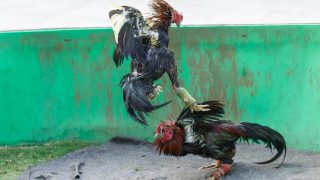 ‘Do chickens count?’ asked a Ninth Circuit Court of Appeals opinion issued in 2016.

More broadly, the Ninth Circuit’s decision in Ortega-Lopez v. Lynch offered a rare opportunity for the federal justice system to consider whether the sort of harms endured by animals exploited for dogfighting, cockfighting, and other criminal bloodsports rises to a level where those animals are victims whose suffering is unacceptable in our society.

The federal government reached out to the Animal Legal Defense Fund, asking that we share with the court our expertise regarding animal law and the status of animals victimized by crime. Our expert attorneys responded with an amicus brief, in favor of neither party, that solely addressed the legal issues implicated by the suffering of chickens (and other illegally fought animals)—standing up to say those animals do count.

In August 2018, more than a year after the amicus brief was submitted, the Board of Immigration Appeals (BIA) — the federal appellate body to whom the Ninth Circuit’s opinion had remanded the case — rendered their decision: illegal animal fighting “… serves no utilitarian purpose, [and] leads to the extreme suffering or death of the animals that are forced to fight for the base entertainment and enjoyment of the people involved” — and the victims of those fights matter.

The criminal justice system strives to serve the needs of three groups impacted by crime: society at large (as represented by prosecutors), defendants, and crime victims — those who suffer from the criminal acts of others. In doing so, our criminal justice system has long recognized that not all crimes are created equal. Some crimes arise from mere recklessness; others require the perpetrator to have engaged in cold, deliberate calculation. Less serious crimes are misdemeanors, more serious are felonies.

A crime’s category may change depending on factors including on how badly injured the victim is, whether the crime was part of a larger criminal scheme, or whether the crime involved an aggravating factor such as use of a deadly weapon. One of the ways the legal system has long made these distinctions between different kinds of crime is by flagging certain crimes as ‘involving moral turpitude.’

This label — a Crime Involving Moral Turpitude (a ‘CIMT’) — means the crime in question consists of more than just breaking a law. Rather, CIMTs involve conduct that is “inherently vile, depraved, or morally reprehensible.” Whether a crime bears the label of involving “moral turpitude” has the potential to impact a diverse range of legal issues, including immigration law, criminal law, and business law. What unites those areas is that in each, laws have been written that take aim at particularly serious crimes — crimes that involve causing victims notable harm in ways that society simply cannot ignore.

Despite the law’s lengthy historical usage of CIMTs, the justice system has not exhaustively determined the full list of crimes bearing the label. Indeed, there are divergent legal mechanisms used to determine which crimes qualify as CIMTs. One approach asks whether the crime both requires sufficient intent and involves “reprehensible conduct.” The other approach adds an additional stage, suggesting that the reprehensibility of criminal conduct can be determined by whether the crime inherently involves fraud, particularly vulnerable victims, or intent to cause significant injury (or actually causes significant injury).

The Animal Legal Defense Fund’s amicus brief took the stance that animal fighting is, on its face, a CIMT because it inherently involves inflicting particularly egregious cruelty on animals who are exploited for fighting. More specifically, the amicus brief argued that animal fighting is a CIMT under both the vulnerable victim and significant injury methods of analysis:

Deciding the case, the BIA reiterated its position that while either the ‘vulnerable victim’ and ‘significant injury’ methods of analysis are sufficient to determine that a crime involves moral turpitude, neither is strictly necessary.

Specifically, the BIA held that “knowingly sponsoring or exhibiting an animal in an animal fighting venture” is so clearly reprehensible that it qualifies as a CIMT without needing to engage in additional analysis regarding victim vulnerability or injury significance.

In this analysis, illegal animal fighting is a CIMT because its purpose is to celebrate and objectify the suffering of sentient beings — in the words of the Animal Legal Defense Fund’s amicus brief, “[c]ausing animals to brutalize each other is the raison d’etre of the fight itself; the goal of an animal fight is to goad animal attacks, attacks meant to injure and kill.”

Notably, while the BIA, having determined that illegal animal fighting is a CIMT, did not go on to explore animal victimhood at length, its decision did highlight and agree with the Animal Legal Defense Fund’s argument that animal fighting involving animals who depend on the humans who exploit them is “especially abhorrent because of the unique relationship humans share with such animals.”

Further, the BIA’s decision echoed the amicus brief‘s argument that chickens — like all other animals protected by federal animal fighting laws — are not objects, but rather “sentient creatures capable of experiencing pain and suffering.” Finally, the BIA — like the Animal Legal Defense Fund’s amicus brief — resoundingly rejected the Ninth Circuit’s suggestion that harm to chickens is too insignificant to count those animals as victims who matter for the purposes of Crimes Involving Moral Turpitude.

What matters is that a human illegally forces an animal — a sentient creature — to suffer for entertainment, not whether the animal is a chicken, or a dog, or any other creature protected by animal fighting laws.

The BIA’s decision and the Animal Legal Defense Fund’s arguments in this case represent an important step forward in improving the legal status of animals.

Achieving legal recognition that animals — and animal suffering — matter not only helps secure justice for individual animals victimized by criminal acts, but improves the position of all animals.

At its core, the animal crime victim movement spearheaded by the Animal Legal Defense Fund is about the law recognizing that animals are not objects but rather living, thinking creatures who suffer when treated cruelly. An object cannot be the victim of a crime, no matter how much that object might be worth.

Humans can be crime victims because being subject to an assault or neglect or other criminal activity hurts them unlawfully. It is just the same with animals: each animal counts, not as a thing but as a being with intrinsic worth — and, as this decision makes clear, that includes chickens.