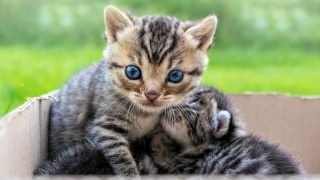 An Act Protecting the Health and Safety of Puppies and Kittens in Cities and Towns (S.2994)

Known as the “Puppies and Kittens Bill,” this proposed legislation would establish or update several critical protections for puppies, kittens, and their guardians.

Puppies and kittens are among the most vulnerable animals.

An Act Protecting the Health and Safety of Puppies and Kittens in Cities and Towns (S.2994), known as the “Puppies and Kittens Bill,” would establish or update several critical protections for puppies, kittens, and their guardians by:

Separating puppies and kittens from their mother and litter too young can lead to behavioral challenges in adulthood, potentially affecting both the animals and their guardians for years to come. This legislation would prohibit the sale of puppies and kittens under 8 weeks of age.

Unscrupulous breeders and dealers often sell animals out of the trunks of their cars in parking lots, at flea markets, and on roadsides. This legislation would ban the sale of dogs and cats in commercial or retail parking lots, at flea markets or other outdoor markets, and on any roadside, public right-of-way, parkway, median, or other similar venues.

Consumers deserve to be able to trust their companion animal care to professionals while they’re at work, out of town, or otherwise unavailable. Unfortunately, without sufficient standards, too many Massachusetts companion animals and their families are suffering tragedies. This legislation would require the Massachusetts Department of Agricultural Resources (MDAR) to establish reasonable rules and regulations for the operation of breeding kennels and catteries that sell companion animals to the public, as well as boarding kennels and daycare facilities for dogs and cats. It would also update and clarify certain outdated language in existing kennel licensing laws.

The Puppies and Kittens Bill is sponsored by Representative Linda Dean Campbell (D-15th Essex) and Senate President Emerita Harriette Chandler (D-First Worcester). It was referred to the Joint Committee on Municipalities and Regional Government on March 29, 2021; they were heard on September 28, 2021, and S.1322 was reported out favorably, carrying the House bill, and referred to the Senate Ways and Means Committee. A redraft of the bill (S.2994) was released from the Committee with a favorable report. It passed the Senate on July 11, 2022. The bill will be referred to the House for consideration.