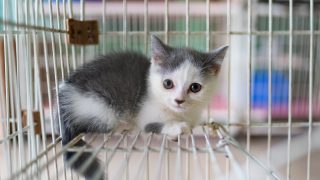 Prevents convicted animal abusers from possessing or accessing animals for a period of time.
The animal possession ban provision would restrict a convicted animal abuser’s access to animals, limiting the pool of potential future victims. Post-conviction animal possession bans are one of the most effective ways to ensure a person does not reoffend. Current Massachusetts law prohibits offenders convicted of felony animal cruelty from working with animals. However, the law only explicitly allows courts to authorize a possession ban following a conviction of animal sexual abuse — not after other kinds of serious animal cruelty convictions. This possession ban provision would authorize a court to prevent a person convicted of serious animal cruelty crimes — including torture, mutilation, and dogfighting — from possessing, adopting, or fostering an animal for at least five years. To facilitate enforcement, the court would notify relevant authorities, including animal control officers, municipal dog licensing officials, special state police officers with the MSPCA and Animal Rescue League of Boston, of the duration of a possession ban.

Funds spay/neuter services for homeless animals and animal control officer trainings.
The Mass Animal Fund provision would direct certain fines collected pursuant to the Massachusetts Department of Agricultural Resources (MDAR) and its animal health laws and regulations to the Homeless Animal Prevention and Care Fund, known as the “Mass Animal Fund.” The Mass Animal Fund provides spay, neuter, and vaccination services to animals in need, including homeless dogs and cats and those living with families who cannot otherwise afford these services. It also provides the required training for animal control officers. The financial challenges created by the COVID-19 pandemic have turned many assistance requests into urgent pleas for help due to housing issues or medical emergencies. Many animals are going unserved, lacking critical health services. This funding will help animals in families impacted by COVID-19 and the related economic downturn.

Facilitates animal cruelty reporting by human services agency staff and contractors.
The cross-reporting provision will remove timing restrictions in the statutes that allow employees and contractors of human services agencies to report suspected animal cruelty. Currently, the timeframe for this reporting has been interpreted at times to apply only to the 10-day investigation period. The PAWS II commission on animal cruelty reporting recommended this amendment to existing law, which will ensure suspected animal cruelty can be reported at any time by employees or contractors of the Department of Elder Affairs, Disabled Persons Protection Commission, and Department of Children and Families.