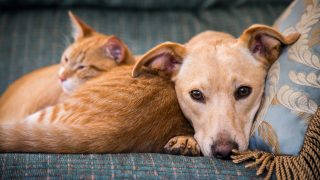 Communication between government agencies is critical to helping ensure multiple forms of abuse — including animal abuse — are exposed and addressed. A.4880/S.3168 would mandate veterinary and inter-agency reporting of suspected animal abuse.

Communication between government agencies is critical to helping ensure multiple forms of abuse — including animal abuse — are exposed and addressed. Cross-reporting is a multi-disciplinary approach to reporting suspected abuse. Laws requiring that agencies responsible for investigating various forms of abuse regularly communicate with one another and report suspected abuse to the proper authorities are crucial to protecting both humans and animals. Additionally, veterinarians play a critical role in fighting animal cruelty. They are uniquely positioned both to witness animal abuse and identify signs of abuse.

A.4880/S.3168 would mandate veterinary and inter-agency reporting of suspected animal abuse. Specifically, the bill requires reporting by (1) employees of the Department of Children and Families designated to investigate child abuse, (2) certain employees at residential health care facilities, (3) employees at the Division of Developmental Disabilities designated to investigate abuse of people with developmental disabilities, (4) employees at the Department of Human Services Division of Aging designated with investigating abuse in violation of the “Adult Protective Services Act, ” (5) law enforcement officers investigating domestic violence, and (6) veterinarians and veterinary technicians. It provides criminal and civil immunity for those mandatory reporters who report in good faith. The bill also expands the statutory definitions of child and elder abuse, abuse of persons with a disability, and domestic violence to include acts of animal cruelty against animals possessed by these groups.

“The Link” refers to the relationship between violence against humans and animal cruelty. Dozens of studies document this link, particularly the link between animal abuse and other forms of abuse such as elder abuse, child abuse, and domestic violence. The FBI now collects data on animal cruelty crimes alongside other felonies, like homicide and arson, and includes animal cruelty as a category in its National Incident-Based Reporting System. The Link makes it critically important suspected abuse is reported by professionals likely to encounter it. Mandating cross-reporting between groups like veterinary clinics and child protection agencies helps protect some of our most vulnerable populations.

Learn more about The Link and veterinarians’ role in reporting cruelty.