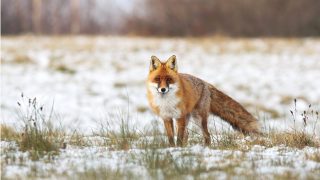 Tens of millions of animals are killed for their fur every year. Legislation to reduce the demand driving the fur industry was introduced in multiple state legislatures in 2021, including in Connecticut, Hawaii, Massachusetts, New York, and Rhode Island. In 2019, California became the first state to do so, banning the sale of new fur products.

In Rhode Island, An Act Relating to Criminal Offenses – Trade in Animal Fur Act (HB 5188 A)  would ban the sale of new fur products in the state, including fur clothing and fashion accessories. The law would not impact the sale of used or second-hand fur products or those that are used in the practice of a religion.

On fur farms, animals like foxes and minks are confined to tiny wire cages for virtually their entire lives. Unable to engage in many of their natural behaviors, animals on fur farms routinely resort to self-mutilation, obsessive pacing, and infanticide. Undercover investigations on fur farms have revealed egregious cruelty — including animals being skinned alive. To maintain the integrity of their skin and fur, animals on fur farms are usually killed via suffocation, electrocution, gassing, or poisoning. Sometimes, they are bludgeoned in the head or face repeatedly.

Intensively confining animals puts public health and the environment at risk. Factory farms are breeding grounds for pathogens that can result in zoonotic diseases. In 2020, mink fur farms in the U.S. and abroad became in hot spots for COVID-19. Waste runoff from factory farms can also pollute the soil and waterways. The tanning and dying process in fur production also uses toxic and carcinogenic chemicals to prevent the skin from decaying.

Innovative technology has produced an array of alternatives with the same warmth, look, and feel as fur. Dozens of leading retailers, brands, and designers have announced fur-free policies.

Representatives Patricia Serpa (D-27), Robert Phillips (D-51), and Steven Lima (D-49) introduced this important animal protection legislation. It was passed by the House on June 17, 2021, after being released from the House Judiciary Committee. The bill will move to the Senate for consideration.

If you live in Rhode Island, please take action to support this bill.