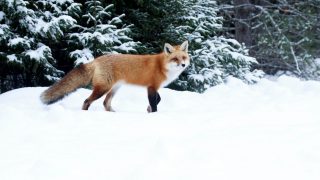 MADISON, WI—Today, the Animal Legal Defense Fund filed a petition for rulemaking with the Wisconsin Department of Natural Resources (DNR), chastising the agency for denying the overwhelming consensus that global climate change is caused by human activities. The petition urges the DNR to honor its statutory obligation to provide Wisconsinites with scientifically sound information about natural resources, including climate change.

The need for this clarifying rule came to light after the DNR quietly scrubbed information about climate change from its website. This move coincides with the rising politicization of climate science across the country. For many industries, news about human-generated climate change is bad for business, so they attempt to leverage their weight with industry-friendly politicians to minimize environmental sciences and cultivate disbelief among the public. The Animal Legal Defense Fund’s proposed rulemaking takes aim at this disingenuous effort.

One industry with a significant interest in downplaying the existence of human-driven climate change is animal agriculture. The Animal Legal Defense Fund has intensely criticized efforts by animal agriculture interests to prevent the passage of laws concerning greenhouse gas emissions and evade current regulations. Factory farming, which includes the Dairy State’s namesake, is a central driver of climate change and has a powerful lobbying presence in the state capital.

Prior to the removal of truthful information about climate change from the DNR’s website, the site accurately described the latest scientific research about climate change and its causes. The website stated there is a widespread scientific consensus that human-created sources of greenhouse gases contribute significantly to climate change, posing a real and serious threat to life on the planet.

The revised website now suggests that climate change is driven by unknown forces, a claim that is in direct opposition to current science. A group of University of Wisconsin climate scientists submitted a letter to the agency declaring their disapproval and raising similar concerns. The revised website implies there is significant debate among climate scientists about its causes. The scientists’ letter states this implication is “simply incorrect.”

The Animal Legal Defense Fund’s petition demands that this inaccurate information be removed immediately and urges the creation of a rule to prevent the future dissemination of such misleading, politicized messaging.

“Wisconsin citizens have a right to accurate scientific information about the state’s natural resources,” says Animal Legal Defense Fund Executive Director Stephen Wells. “Climate change is an imminent threat to humans, animals and all living things. It is imperative that accurate information is available to the public, so we can begin to combat the sources causing the damage—like factory farms.”