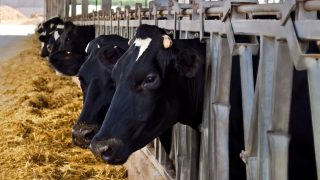 New Mega Dairy is an Environmental Catastrophe for Oregon Residents

The environmental devastation created by mega dairy facilities (“factory farms”) is immense. These operations, where thousands of cows are confined in cramped and often-filthy conditions, store excessive manure in giant lagoons, which create a chemical reaction that ultimately releases methane into the earth’s atmosphere. These methane emissions are a leading contributor to climate change. Dairy factory farms are also a major source of water pollution, endangering wildlife and public health.

At the end of May, the Animal Legal Defense Fund, in conjunction with other local and national groups, challenged the state of Oregon’s approval of a water-pollution permit for Lost Valley Farm, a mega dairy. The coalition argues that the permit does not meet requirements under state law or under the Clean Water Act, a federal law that regulates the discharge of pollutants into U.S. waters. Specifically, the Clean Water Act requires “point sources” of pollution such as large factory farms to obtain a permit before discharging animal waste or wastewater.

The Animal Legal Defense Fund, along with the Center for Biological Diversity, the Center for Food Safety, Columbia Riverkeeper, Food & Water Watch, Friends of Family Farmers, Humane Oregon, Oregon Physicians for Social Responsibility and Oregon Rural Action, filed a petition for reconsideration with the Oregon Department of Environmental Quality and the Oregon Department of Agriculture. The petition argues that the permit is invalid because the mega dairy has inadequate protections against the discharge of fecal matter, drugs, and heavy metals, all of which will threaten public health, groundwater, and wildlife.

A Day on a Dairy Farm

Understanding how mega dairies function is crucial to understanding their environmental impact. Generally, cows are housed indoors in huge concrete and metal barns with poor ventilation. Cows stand on hard concrete, which leads to foot damage and exacerbates lameness. They live their entire lives indoors, only moving between stalls and milking parlors until they are killed for beef. Many factory farms keep cows tethered by the neck inside stalls to further restrict movement.

A typical dairy cow produces 100 pounds of milk daily, roughly ten times more than a cow would produce naturally. This high milk production is the result of human manipulation. Like all mammals, cows only produce milk as a result of pregnancy.  Dairy cows are forcibly impregnated, and kept pregnant almost continuously, to maintain milk production. All of the milk produced is intended for sale, so calves are taken from their mothers immediately after birth. Male calves are marked to be slaughtered as veal, and female calves are incorporated into the dairy stock to replace “older” cows. Dairy cows’ bodies begin shutting down at just three or four years of age as a result of the significant physical and emotional toll of constant pregnancy, lactation, and abuse.

A dairy housing 2,000 cows produces roughly 240,000 pounds of manure daily, and the largest mega dairies house tens of thousands of cows. Lost Valley Farm will eventually house 30,000 cows, producing 3,600,000 pounds of manure in a single day. All this manure must be managed to avoid contaminating groundwater and polluting the environment. Manure management includes spreading it onto fields and holding it in manure “lagoons” (massive pools that hold millions of gallons of manure). Spills and runoff into nearby waterways are a frequent problem.

Polluted Water Hurts the Community, Wildlife, and the Environment

The location of Lost Valley Farm is particularly concerning. The mega dairy is in the Lower Umatilla Basin Groundwater Management Area, which already suffers from groundwater depletion and high groundwater nitrate concentrations. The operation of Lost Valley Farm, which experts believe will create roughly 23 million cubic feet of waste and wastewater each year, will further compromise the area and endanger Oregon residents who use the groundwater for drinking water.

Groundwater contamination occurs when potentially harmful substances enter groundwater, rendering it unsafe for humans and non-human animals. Despite the deadly risks that contaminated groundwater presents, the permit issued by the state sets up inadequate groundwater monitoring. The parameters of the permit for Lost Valley Farm only mandate sporadic testing and exclude common pollutants like pharmaceuticals and pesticides.

Local wildlife is also negatively impacted by the degraded water. All area wildlife, from deer to trout, eventually encounter the pesticides, antibiotics, and hormones flooding into local waterways, because these animals either consume or live in the affected water. Dairy factory farms across the country are responsible for aquatic “dead zones,” which refer to hypoxic (low-oxygen) areas in bodies of water that can no longer support aquatic life.

The two Oregon agencies have 60 days to respond to the petition. The Animal Legal Defense Fund and the coalition intend to pursue legal remedies in court if the agencies fail to respond or deny the request. The protection of local wildlife and the safety of residents and farmed animals rest in the balance. The state can either sanction the endangerment of its citizens by animal agriculture operations or enforce its own laws and protect the environment, human health, and animals.