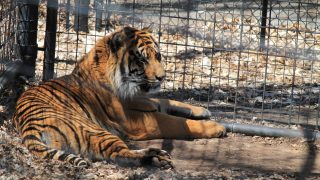 The Animal Legal Defense Fund is deeply saddened by the death of Tony, the Siberian-Bengal tiger held captive in the Tiger Truck Stop parking lot in Grosse Tete, Louisiana. For more than seven years, we litigated on many fronts to free Tony, and we are devastated that despite our best efforts, he lived and died caged at a truck stop that could never provide the life he deserved.

We—like you—are frustrated and angered that Tony continued to suffer at the Truck Stop even after the Animal Legal Defense Fund successfully obtained a judgment in 2012 prohibiting Louisiana from issuing any future permits for Tony’s captivity.  That judgment should have required the State of Louisiana to move Tony to a reputable sanctuary where he could have lived for the last five years in the naturalistic environment he deserved. Rather than giving Tony the life he deserved, however, the Louisiana legislature passed a law exempting the Tiger Truck Stop—and the Tiger Truck Stop alone—from the Louisiana Big Cat Ban, undoing our victory in court and trapping Tony at the truck stop.

Despite our best efforts, we were unable to get that corrupt legislative maneuver declared unconstitutional in time to save Tony.  But rest assured our litigation efforts on behalf Tony’s fellow big cats will not end.

We will continue to fight with vigor to uphold the constitutionality of Louisiana’s Big Cat Ban against the challenges to that law from the Tiger Truck Stop’s owner, Michael Sandlin. A victory in this litigation will ensure that Tony will be the last tiger to suffer at the Truck Stop and there will never be a Tony II or Tony III who will have to suffer the same fate.

While we are saddened that we were unable to save Tony from his tragic confinement so that he could join other Animal Legal Defense Fund clients like Rickey the Bear, Njjarra the Lion, and Bear the Wolf at reputable sanctuaries—we will continue to fight in the memory of Tony and the millions of other animals who have been mistreated, until no more animals are subject to such suffering.