According to Stetson Animal Legal Defense Fund Student Chapter president John Hixenbaugh, “The college was not offering animal law for the fall, so we decided to put together our own law program for students.” The series will feature attorneys speaking about current animal law cases in Florida, factory farming, and Florida’s pet trust law. The first session of the series was held on September 8, 2008, and featured local animal law attorney Jennifer Dietz.

Attorney Jennifer A. Dietz, founder of Animal Law Attorneys, LLC, Florida’s first law practice devoted solely to animal law issues, spoke to students about how to prevail in animal law cases given the current state of the law in Florida. Dietz told students, “Although animal law is one of the newest areas of the law, it is growing at an immense rate.

The decisions which are being made by the courts today will greatly affect the way animals are treated in the near future. The more animal law attorneys who practice for either law firms, solo practices or for non-profit organizations, the more the courts and the legislature will take notice that American citizens value their companion animals as more than mere property, such as a toaster oven… I encourage all law students to consider the practice of animal law either as a career or for their pro bono work as an attorney.” Ms. Dietz is a contributing attorney to Animal Legal Defense Fund Student Chapter and an adjunct animal law professor at the college. 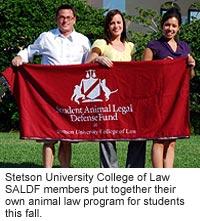 In October, Stetson’s Animal Legal Defense Fund Student Chapter plans on hosting its second annual Halloween Pet Supply Drive. Boxes will be placed around campus for students to donate toys, pet food, blankets, and other items which will then be donated to local shelters.

The response to last year’s drive was overwhelming and the chapter agreed to make it an annual event. The SALDF chapter at Stetson is two years old and growing. According to Hixenbaugh, “It used to be that if you supported issues like environmental and animal law, you were considered to be part of the fringe. Now, these issues appeal to a mainstream audience, which helps both the animals and the planet. I find that students are not just interested because these issues are trendy. I believe that they are getting involved because they are passionate about animal welfare.”