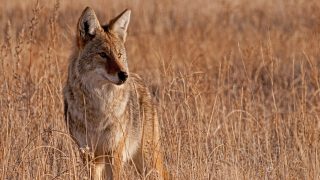 Siskiyou is the latest county in California to reexamine and suspend its contract with Wildlife Services amid legal pressure from the animal-protection and conservation coalition led by the Animal Legal Defense Fund.

Over the past decade Wildlife Services has killed more than 28,000 animals in Siskiyou County.

Coyotes, mountain lions, and black bears were all among the victims of the federal wildlife-killing program, which used inhumane and indiscriminate methods like traps and snares to target them.

But the coalition warned Wildlife Services contracts, which have been common among California counties, violate the California Environmental Quality Act if the county failed to perform an environmental impact study before engaging with the agency’s services.

Earlier this summer, Shasta County suspended its contract with Wildlife Services. In 2015, in settlement of a lawsuit filed by coalition organizations, Mendocino County agreed to fully evaluate nonlethal predator-control alternatives. And in 2017 a California court ruled in favor of the coalition in finding that Monterey County must conduct an environmental review before renewing its contract with Wildlife Services.

Lethal wildlife programs like Wildlife Services are ineffective, cruel, and harmful. Nontarget animals, including domestic dogs and cats, can be unintentionally killed. In Siskiyou County, the program, which has killed tens of thousands of birds, may have also harmed protected wildlife such as tricolored blackbirds.

We have urged Siskiyou County officials to now explore nonlethal options to address native wildlife, which are more cost effective, humane, and have proven to work in other counties in California.