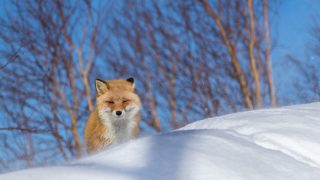 “I hope that it inspires other cities and the country to take action. Certainly we need better federal regulations on fur farming. There’s no humane way to raise an animal to peel its skin off.”

San Francisco has become the third and largest city in the nation to prohibit the sale and manufacture of products containing animal fur. The groundbreaking ordinance was unanimously approved by the San Francisco Board of Supervisors on March 20, 2018.

San Francisco Supervisor Katy Tang, who was inspired to spearhead the ban after two other California cities passed similar legislation, said in a press release:

Fur factory farms are violent places for animals where they are gassed, electrocuted, poisoned and injured for the sole purpose of creating clothing and accessories. It is unconscionable that San Francisco would continue to allow these types of products to be sold, and we must set the example for other cities across the country and the globe to join us in banning fur apparel.

West Hollywood, known for its animal-friendly legislation, was the first city to pass a fur ban in 2011, which went into effect in 2013. The Animal Legal Defense Fund provided model language for that law. Berkeley passed a similar law last year, with councilmembers citing concerns about the welfare of animals and fostering a humane environment. Likewise, San Francisco’s ordinance unequivocally states that concern for the animals who suffer and die in the fur trade while cruelty-free alternatives are readily available was the reason for the ban:

In addition to being the first major U.S. city to ban fur, San Francisco is also regarded as a fashion hub and has far more stores that sell fur apparel than Berkeley or West Hollywood, making the legislation even more groundbreaking.

In arguing for the ban, San Francisco supervisors spoke out strongly on behalf of the millions of individual animals who are killed for their pelts each year. As reported by the San Francisco Chronicle:

“It is estimated that around the world some 50 million animals are slaughtered in gruesome ways so that we can wear their fur and look fashionable,” said Supervisor Katy Tang, the ban’s author. “My hope is that it will send a strong message to the rest of the world.” Tang usually votes on the pro-business side of issues, but not this time. “I am a huge animal rights advocate, and while in office I would like to use my legislative abilities to help those who can’t speak for themselves,” Tang said. “It’s unethical and immoral to raise animals for their skins,” said fellow Supervisor Jeff Sheehy.

The new law goes into effect Jan. 1, 2019, with current retailers having until 2020 to sell their existing inventory. The ban exempts taxidermy and used fur products sold by secondhand stores, nonprofit organizations, and other outlets not normally in the business of selling fur.

West Hollywood’s fur apparel ban – the nation’s first – survived a federal challenge mounted in 2013 by Los Angeles-based retailer Mayfair House, which alleged the law was unconstitutional and that the city overstepped its authority in banning fur apparel sales and that such trade should be regulated by the state. The Animal Legal Defense Fund filed an amicus brief in this case, asking the court to uphold the city’s constitutional authority to protect animals within city limits, and supporting the city’s motion to dismiss the lawsuit. In July 2014, a federal court agreed and dismissed the fur retailer’s action.

In 2015, after another challenge by the same retailer, West Hollywood’s fur ban was redrafted to allow the sale of fur obtained by lawful trapping. The trapping exemption was added so that the municipal fur ban would not clash with California’s Fish and Game code, which allows for the display and sale of fur lawfully taken by people with a state trapping license. San Francisco’s ordinance includes a similar exemption for trapping.

San Francisco provides an interesting case study in historical change. The first major city to outlaw the sale of animal fur was also once the center of the fur trade in the western United States. According to the Washington Post:

The coastal city named for Saint Francis of Assisi, the patron saint of animals, was vital to the fur trade beginning in the late 1700s…In the centuries since then, furs have lived several lives, going from kitschy to fashionable to, in some eyes, evil…Now, they’ve begun falling out of fashion, quite literally. Many of the world’s most elite fashion house – places where fur was basically a requirement when designing new garments – have disavowed the animal-based material.

In sync with the many major fashion houses that have decided to part with animal fur, San Francisco’s ordinance cites changing times and evolving technologies that have rendered the need for animal fur obsolete, as well as the lack of legal oversight of the fur industry, as reasons why the legislation was necessary:

Historically, animals were hunted or trapped for food, and their pelts were used to provide protective clothing. Over time, civilizations and technology have developed such that fur is less of a necessity and more of a luxury…Further, more animals are now killed to make decorative fur trim than to manufacture full fur garments…Existing laws require relatively little oversight of the fur farming and fur trade industries. Compliance with guidelines issued by the American Veterinary Medical Association is not mandatory, and fur farms are not monitored by any government agency.

Animal advocates have been working to extinguish the cruel fur industry for decades. Fur farming has been banned or is being phased out in many European countries including Germany, Austria, Croatia, the United Kingdom, the Czech Republic, and Norway. Others, like Switzerland, have passed such strict welfare regulations that fur farming had been effectively eliminated without an outright ban. However some countries, like China – the world’s second biggest producer of farmed fur– have very few regulations.

While it remains to be seen if San Francisco’s ban will “set off a wave of similar bans across the nation,” it does demonstrate how as a society we are increasingly reevaluating and refining our values and laws regarding what is acceptable treatment of animals. Following the city council vote, Supervisor Tang succinctly embodied this changing ethos in a tweet:

“Speaking on behalf of those with no voice, my colleagues just voted 10-0 to support my ban on the sale of new fur apparel & accessories beginning 1/1/19. No more profiting off the literal backs of animals.”