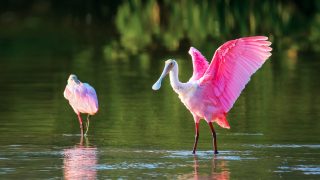 On Tuesday, January 28th, the Animal Legal Defense Fund and the Humane Society of the United States hosted our first joint Florida Humane Lobby Day. More than 70 animal advocates showed up in Tallahassee to speak out for animals and meet with their elected officials.

Humane Lobby Days are events where advocates come together to learn the basics of lobbying for animals and then put their new skills into practice. At this one, advocates spent the morning at Tallahassee City Hall, networking, learning about the key animal protection bills being considered in the Florida Legislature, receiving tips on lobbying, and attending presentations on priority bills. In the afternoon, advocates headed over to the Capitol building to discuss the bills with their elected officials and ask for support or opposition.

There are several bills that the Animal Legal Defense Fund and the Humane Society of the United States prioritized for this year’s Humane Lobby Day. Three of the most critical were:

We also discussed bills that would prohibit declawing of cats, authorize emergency medical teams to care for injured police canines, prohibit cruel captivity of orcas, restore endangered species act protections for wild animals in Florida, require veterinary reporting of animal abuse, prohibit bear poaching, encourage cross reporting between child abuse and animal abuse, and prohibit leaving dogs tethered outside during natural disasters. There is clearly no shortage of animal protection bills in Florida this session, which is an encouraging trend.

Thank you to all of the advocates who traveled from across the state to attend this year’s Humane Lobby Day. If you’re interested in advocating for animals in your own community, read Working with Legislators to learn the basics of lobbying for pro-animal legislation. We hope to see you again next year!