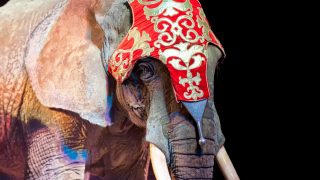 Beulah, an Asian elephant, was exploited for decades by the Commerford Zoo. Born in the wild in Myanmar in 1967 and imported to the U.S., Beulah was sold to the Connecticut-based traveling show and petting zoo, Commerford Zoo, before she was six years old. Just prior to her death in 2019, she was seen collapsing multiple times at the Big E in West Springfield, Massachusetts. Beulah is survived by her former companion, Minnie, an Asian elephant who continues to be exploited by Commerford.

Wild animals don’t belong in circuses or traveling shows. They are typically subjected to neglect, abusive training, prolonged confinement, and their use in circuses puts the public at risk. It’s not entertainment — it’s cruelty. An Act Relative to the Use of Elephants, Big Cats, Primates, Giraffes, and Bears in Traveling Exhibits (S.2251) would prohibit the use of certain animals in circuses and traveling shows in Massachusetts.