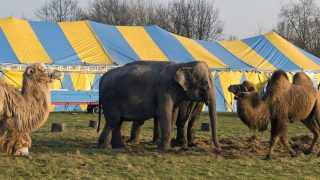 The Traveling Exotic Animal and Public Safety Protection Act (TEAPSPA) would prohibit the use of wild animals in traveling shows such as circuses.

Wild animals used in circuses spend their lives in cramped cages, forced to perform unnatural and sometimes painful tricks, day in and day out. These animals endure constant stress and are denied the opportunity to engage in natural behaviors. Wild animals have complex behavioral, physical, and emotional needs that cannot be satisfied by traveling shows designed for human entertainment.

The Traveling Exotic Animal and Public Safety Protection Act (TEAPSPA), H.R. 5999/S. 3220, amends the Animal Welfare Act to end the use of wild animals in traveling shows, like circuses, with limited exceptions for certain entities such as accredited zoos, wildlife sanctuaries, and rodeos. TEAPSPA is sponsored by Representatives Raúl Grijalva (D-AZ) and David Schweikert (R-AZ) and Senator Bob Menendez (D-NJ).

Multiple cities and states have enacted similar legislation either prohibiting the use of wild animals generally (or certain species of animals) in traveling shows. Not only do these laws protect animals, they also promote public safety. Many traveling shows are ill-equipped to protect people from dangerous wild animals. These companies oftentimes rely on collapsible, temporary, and mobile facilities that are unable to consistently contain large, dangerous animals. Numerous incidents of animals injuring or even killing “trainers,” circus staff, and members of the public have been documented.

The Animal Legal Defense Fund supports TEAPSPA and encourages local and state governments to enact legislation ending the use of animals in circuses in the meantime. Consider sending your federal legislators a polite message urging them to support the Traveling Exotic Animal and Public Safety Protection Act.