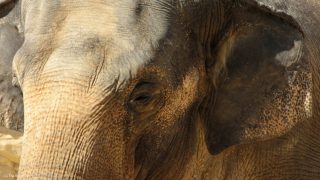 Lucky and Nicole: Together in Solitary

A female Asian elephant named Lucky, who has lived for 53 years in captivity under conditions that don’t meet her basic physical, psychological or social needs, deserves some relief. In December 2015, the Animal Legal Defense Fund filed a lawsuit on behalf of concerned San Antonio residents against the San Antonio Zoo, seeking compliance with Association of Zoos and Aquariums’ (AZA) elephant-management guidelines. The lawsuit, filed under the Endangered Species Act, notes that conditions for Lucky have caused her psychological torment and physical injury.

We also hoped that zoo officials would release Lucky, to spend her final days at a sanctuary in the company of other elephants, walking in grass, resting in shade. The Tennessee Elephant Sanctuary offered such accommodations free of charge. The zoo declined.

The zoo’s former director has said that Lucky was “weird” and “too old” to move to sanctuary; his successor, Tim Morrow, maintains that Lucky is simply better off alone. We’ve come to expect such feigned ignorance about the natural needs of captive animals from people who benefit from their captivity, but Morrow has gone a brazen step further.

He’s introduced Nicole, an Asian elephant held captive as a circus performer for 36 years, as a companion. Morrow described the act as “the first step into our next phase.” Adding an aging elephant and citing it as a solution effectively doubles down on the zoo’s willful ignorance of elephant welfare. Now there will be two elephants living in substandard conditions—still out of compliance with AZA guidelines and the Endangered Species Act. That issue aside, not all elephant pairings are compatible, and Nicole has been removed from the elephant companions she’s known for decades. To split substandard conditions between two arthritic animals and sell it as an improvement is either insulting or oblivious.

Not surprisingly, the zoo continues to spin the story as a win for Lucky. “Elephant in need of a friend finds perfect match,” declared USA Today, alongside kid-friendly video, oompah circus music—and zero supportive science. If Morrow means it when he says “Lucky’s health and well-being is the primary focus,” she would be moved to a sanctuary, not expected to share her woefully inadequate enclosure with another elephant she might not even bond with.

Our litigation aims to remedy that, either through compliance with the AZA guidelines, or by seeing these elephants liberated to live comfortably with others of their own kind at an appropriate sanctuary.