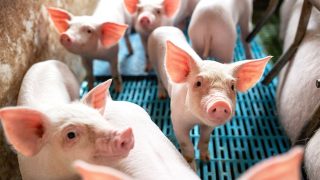 On December 18, 2019, the Animal Legal Defense Fund, with a coalition of environmental and animal protection groups, filed a lawsuit against the U.S. Department of Agriculture (USDA) for issuing a final rule allowing pig slaughterhouses nationwide to police themselves and kill pigs at very high line speeds — leaving millions of pigs vulnerable to increased suffering and terror.

The Modernization of Pork Slaughter rule, finalized in October 2019, expands a problematic pilot program that allowed five of the nation’s largest pig slaughterhouses to increase the speed at which pigs are slaughtered. The swine Hazard Analysis and Critical Control Point-based Inspection Models Project (HIMP) program began in 1997 — and, since its inception, has been widely criticized by watchdog groups, former USDA food safety inspectors, and even the USDA’s own Office of Inspector General.

Under the Federal Meat Inspection Act, the USDA is charged with inspecting slaughterhouses to ensure meat is safe for human consumption and that animals are slaughtered using methods that reduce suffering. However, meat conglomerates strive to kill and process as many animals as possible to maximize profit; to them, the suffering of pigs is an unimportant side effect of this drive for ever faster slaughter speeds and greater profits.

Indeed, at one of the plants that participated in the HIMP pilot program, where pigs were killed for Hormel Foods products like Spam and Natural Choice deli meats, an undercover investigation documented horrific abuse as employees struggled to keep up — including illegally dragging, kicking, beating, and excessively shocking pigs with electric prods. Other evidence has confirmed numerous instances of pigs who have not been rendered unconscious before being killed — resulting in animals being boiled alive in scalding tanks and left to bleed out.

The harms are not to the pigs alone. Consumers are endangered by high line speeds, through decreased food safety oversight by re-assigning critical inspection responsibilities to untrained slaughterhouse workers.

Slaughterhouse workers are also put at risk, with the National Council for Occupational Safety and Health warning the faster processing speeds will lead to an increase in workplace injuries. Workers are challenging the new rule’s legality in a separate lawsuit.

Pollution is another serious concern. The USDA failed to conduct any environmental review for an action that is sure to increase pig raising and slaughtering nationwide, further amplifying the already significant pollution caused by pig slaughterhouses and factory farms.

The USDA’s adoption of the Modernization of Pork Slaughter rule violates federal law. The agency acted contrary to the mountain of evidence before it that demonstrates the rule’s dangers, in violation of the Administrative Procedure Act (APA). The rule also flouts the Federal Meat Inspection Act and Humane Methods of Slaughter Act. And the USDA’s failure to conduct any environmental review whatsoever before finalizing the rule violates the National Environmental Policy Act’s (NEPA) guarantee of open and environmentally-informed federal decision-making.

The factory farming and slaughter industry requires more oversight, not less. The disastrous HIMP program should have been discarded as the failed experiment it is — not illegally expanded to all pig slaughterhouses nationwide.

The lawsuit was filed in the U.S. District Court for the Western District of New York, with Farm Sanctuary, Animal Equality, the Center for Biological Diversity, Compassion Over Killing, Mercy For Animals, and North Carolina Farmed Animal Save. The plaintiffs are represented by Lewis & Clark Law School’s Animal Law Litigation Clinic.