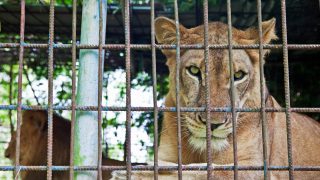 The lawsuit asserts the agency must be able to remove animals if the USDA has deemed the facility unable to provide minimum standards of care set out by the Animal Welfare Act.

WASHINGTON, D.C. — Today, the Animal Legal Defense Fund filed a lawsuit challenging the U.S. Department of Agriculture’s (USDA) decision to deny a petition for rulemaking that urged the agency’s Animal and Plant Health Inspection Service (APHIS) to revise its limited animal confiscation regulations and establish procedures for relocating animals from facilities that do not comply with the Animal Welfare Act (AWA). The petition seeks to close a fatal gap in the USDA’s AWA regulations, in which the USDA — contrary to its statutory duty to “insure that animals…are provided humane care and treatment” — has prevented itself from relocating animals from facilities whose conditions are so dire that the agency has sought to revoke or terminate their AWA licenses. A policy which has earned the moniker: “revoke and run.”

The USDA often issues damning inspection reports against facilities that chronically flout AWA regulations but refuses to remove and relocate the animals from the facilities, even in situations when animals are at great risk of increased suffering and even death. Some examples include:

“If an animal exhibitor is unable to meet minimal legal expectations when they are subject to inspections, expecting for conditions to improve without any oversight or the financial gain previously generated by the license is asinine,” says Animal Legal Defense Fund Executive Director Stephen Wells. “It is as if to say ‘you have treated these animal so poorly, your punishment is: the animals will further suffer here and die.’”

In March 2022, the Animal Legal Defense Fund’s petition for rulemaking was denied by the USDA on the falsehood that it does not have statutory authority to expand its confiscation regulations. The USDA wrongly contends the agency is prohibited from removing and relocating animals — even if they are at direct risk of suffering — during and after agency actions to revoke or terminate facilities’ AWA licenses. This interpretation is contrary to Congress’ purpose of ensuring humane animal care and treatment through the AWA.