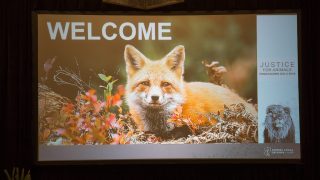 Held at the elegant Luxe Sunset Boulevard Hotel in the Luxe Sunset Ballroom, friends and colleagues gathered to toast the animals and reflect on the milestones of the past year.

Opening remarks from Emcee Charlotte Ross emphasized the importance of the mission of the Animal Legal Defense Fund to provide a voice for animals through the legal system which categorizes animals as mere property.

Read more event details and enjoy the photos taken during the gala.

Courtyard of the Luxe Boulevard Hotel where the gala was held.

A gallery of photos, representing the Animal Legal Defense Fund’s recent victories, was on display.

Winky Smalls, Karen Dawn’s rescued dog, was happy to mingle with guests throughout the night.

Philanthropist Bobi Leonard attended the event with her husband Paul and her dog Buddha.

A gallery of photos, representing the Animal Legal Defense Fund’s recent victories, was on display.

Upon arrival, guests received a paddle for the night’s auction before moving to the courtyard for cocktail hour.

Actress and host for the event Charlotte Ross with Stephen Wells.

Executive Director, Stephen Wells shared with guests an in depth look at the achievements for animals from the past year.

2018 marked the beginning of the milestone legal case in which Justice the Horse, represented by the Animal Legal Defense Fund, sued his abusive owner for damages to cover his necessary lifelong care incurred as a result of the neglect he endured from his owner.

In another case, a dog named Bella lost her life to her abusive owner and inspired Bella’s Bill. The Bill, created by the work of the Animal Legal Defense Fund and New York state legislators, fights to improve the antiquated animal welfare laws of the state of New York. Other successful pursuits include the rehoming of animals from the Deer Haven Mini Zoo in Maryland, Ag-Gag victories in the states of Idaho and Utah furthered similar work in Iowa and North Carolina, and undercover investigative documentation of the suffering of pigs in Nebraska.

Special thanks were given to the Gold Supporters of the event: Seth Fonti & Rachael Klein, Tatiana Freitas, and the anonymous supporter who supported the Animal Legal Defense Fund on behalf of all unwanted cats at shelters, and those living and breeding under apartments or in alleys with special recognition to those who help our feline friends with trap, neuter, and return efforts. Also recognized were Silver Supporters Kate & Ryan Myers, Sejal Vijay Sanghvi, and Chris A. Hollinger/Sleeping Lion SFO.