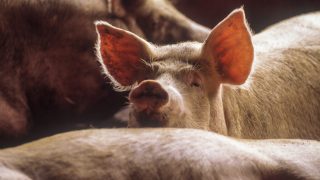 The animal agriculture industry — which is primarily comprised of enormous, multinational corporations — profits1 from exploiting animals and humans alike. Exploited humans include industry workers, who labor on factory farms and in slaughterhouses and meatpacking plants. These workers earn poverty wages2 to perform dangerous and traumatic jobs.

On factory farms, farmers — typically contract growers — bear all of the risk and hazards of raising vast numbers of animals in intensive confinement, while the vertically integrated corporations — Tyson, JBS, Smithfield, and the like — own the animals, control the manner of raising them, and reap all the financial reward. The result is a race to the bottom that pits farmers against each other in pursuit of ever greater speed and efficiency, with animals and workers the unfortunate casualties.

Workers on factory farms — some of whom are imprisoned persons or are members of otherwise vulnerable populations3 — have even less power than their contract grower employers, and labor in dangerous, dirty environments. Factory farms are literal cesspools — confining thousands of animals together in close quarters among and above their own waste, which may be teeming with insects and rodents.4 Animals are dosed with antibiotics, hormones, and other drugs, like beta-agonists ractopamine and zilpaterol, to keep them gaining weight and prevent them from succumbing to illness in their disease-ridden quarters.

In such environments, workers are exposed to serious health threats including viruses like bird flu and swine flu, as well as drug resistant bacteria. Bacteria such as salmonella, E. coli, and staph, can jump from confined animals to workers, causing Methicillin-resistant Staphylococcus aureus (MRSA) and other difficult-to-treat infections.5 Exposure to beta-agonists like ractopamine has been linked to adverse reactions in factory farm workers and producers, with the Food and Drug Administration (FDA) receiving complaints of nausea, dizziness, headaches, fever, nose bleeds, respiratory issues and chest pain, allergic reactions, cardiac issues such as irregular heartbeat and rapid heartbeat, and other serious medical conditions, from workers directly exposed to animals fed beta-agonists (and from consumers who eat the meat of beta-agonist-fed animals).6

Inside the vast, windowless sheds on factory farms, workers breathe air permeated with noxious gases including ammonia and hydrogen sulfide, and with dust and dander. Factory farms are a major source of particulate matter — tiny particles made up of dried manure, bedding materials, animal dander, and chicken and turkey feathers — that can cause or contribute to several respiratory diseases.7

Inside these environments, workers must perform dangerous jobs — moving stressed, aggressive pigs among tight, confined spaces, for example, or gathering and catching panicked chickens as quickly as possible. Teams of chicken catchers, typically employed by subcontractors of the chicken companies, crowd together in vans at night to go to factory farms.8 Workers grab the birds up by hand, by the thousands, and load them into cages for transport to slaughter, making about $2 per worker for every thousand small chickens the crew catches. Workers’ hands become injured and disfigured from the dangerous, repetitive motions.9 Factory farm workers may also have to subject struggling animals to “processing” —performing amputations, such as tail docking, without anesthesia — or kill them by crude means, such as manual blunt force trauma (slamming piglets’ heads on the floor or wall).

On top of this, when emergencies, like the COVID-19 pandemic, occur, slaughterhouses may slow down and halt processing, and factory farm workers may be forced to quickly kill and dispose of thousands or even hundreds of thousands of animals in environments that were never meant for such mass slaughter. Killing animals by foam, gassing, or even ventilation shutdown — turning off air vents and suffocating or cooking the animals to death inside the barns — workers must then dispose of the thousands of bodies, including through on-site incineration or mass burial.

Having to engage in these large-scale cruelties day after day, in dangerous and dirty environments, exacts a steep physical and psychological toll on factory farm workers.10

There are more than 330,000 workers in slaughterhouses and meatpacking plants across the country.11 They have long been rife with “systematic human rights violations” and exploitation.12 Working in a slaughterhouse is one of the most dangerous jobs in the United States.13 Workers are more than three times likely than workers in other industries to become injured on the clock, and there are an average of two amputations each week.14 An average of eight workers die each year.15 And even if a worker is lucky enough to avoid catastrophic injury or death, they will nonetheless be subject to the “cumulative trauma of repeating the same, forceful motions, tens of thousands of times each day,” which can cause chronic pain and severe and disabling injuries over time.16

Further exacerbating the dangerous and exploitative conditions in slaughterhouses and meatpacking plants is the fact that most workers are marginalized and minoritized humans. Like on factory farms, some workers are imprisoned persons.17 Virtually all workers are low-wealth, and most are Black, Indigenous, Latino, and other people of color.18 Many workers are refugees,19 while up to one third are immigrants and one quarter are undocumented.20 Such vulnerable workers are often too afraid — of retaliation and/or deportation — to report injuries, illness, dangerous working conditions, harassment, other labor violations, or environmental or animal welfare violations.21 The animal agriculture industry exploits these vulnerabilities to maximize profits at the expense of workers. 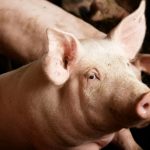