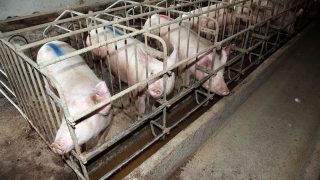 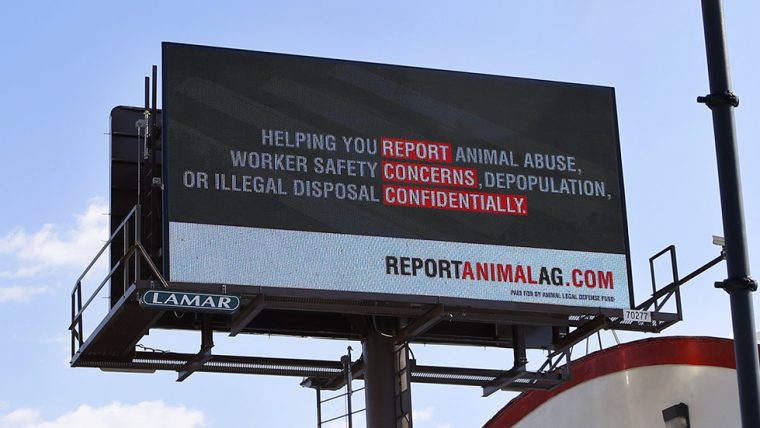 SAN FRANCISCO, CA – A series of billboards, in English and Spanish, are launching near slaughterhouses across the country — offering an online tip portal where industrial animal agriculture workers can report any concerns. COVID-19 is hitting the factory farming industry especially hard, due to its rigid and fragile supply chain from grower to slaughter. Multiple workers have voiced concerns, leading Joaquin Phoenix to partner with the Animal Legal Defense Fund in offering and promoting an online tip portal — ReportAnimalAg.com — to allow individuals to remain anonymous and avoid retaliation.

Due to the cramped working environments inside slaughterhouses, the pandemic spread quickly through employee ranks — requiring many large facilities to temporarily shut down. This created a bottleneck, leaving many animals — especially pigs and chickens — stuck at farms longer than anticipated, growing larger and older than slaughterhouses could handle or the industry desired. Industry associations and the U.S. Department of Agriculture (USDA) quickly offered recommendations on “depopulation”— mass killing of animals on farms. Suggested methods include suffocating chickens with foam, blunt force trauma, and ventilation shut down — executed by shutting down all fans and vents to enclosed barns while animals suffocate and are baked alive in rising temperatures over multiple hours.

“Despite the animal agribusiness industry’s flagrant disregard for worker safety as COVID-19 ravages slaughterhouses, a surge of whistleblowers — under the constant threat of employer retaliation — are coming forward with information about the mass killing of animals and disposal practices that have severe environmental implications,” says actor and advocate Joaquin Phoenix. “Whistleblowers are instrumental in helping animal protection organizations identify, investigate, document, and expose cruelty. ReportAnimalAg.com provides a safe space for employees to confidentially, and with anonymity, voice their concerns. Our billboards will be raised near factory farms and slaughterhouses across the country.”

The industrial animal agriculture industry has done everything possible to prohibit the documentation of its facilities, including lobbying for so-called Ag-Gag laws, designed to make exposing animal abuse and other potential crimes in animal agriculture facilities illegal — many of these laws have been struck down as unconstitutional after legal challenges by the Animal Legal Defense Fund.

“The animal agriculture industry doesn’t want the public to see operations when everything is ‘business as usual,’ much less conditions during a pandemic,” says Animal Legal Defense Fund Executive Director Stephen Wells. “Workers are putting their lives at risk for corporate bottom lines. We want them to know they can report illegal or dangerous conditions anonymously and we will take appropriate action.”

On May 29, 2020, a graphic video was released after a whistleblower came forward in Iowa — exposing the cruel reality of ventilation shut down: pigs calling out in distress as they were slowly cooked to death with steam over the course of many hours. There are conflicting reports of how many animals have been killed nationally — or are planned to be — and no reporting requirements for how the animals’ bodies are disposed of. Industry recommended disposal methods include burning the bodies onsite, burial, and composting (with recommendations to put the deceased animals through a wood-chipper for easier decomposition). Each method has serious public health and environmental concerns.

“The public has a right to know what is being done — and the dangers associated with the process of mass killing and disposal of hundreds of thousands of animals,” says Wells.

June 9, 2020, the USDA issued a press release reporting most slaughterhouses have reopened and are running at 95 percent capacity — meanwhile COVID-19 continues to spread, heightening the Animal Legal Defense Fund’s concerns for worker and animal safety.

The Animal Legal Defense Fund joined a coalition of environmental justice and public health groups in filing a legal petition calling on the USDA to ban dangerous on-site incineration and mass burial of animals. The petition also calls for the creation of a public, online database that tracks federal funding for the disposal of animals, as well as disposal locations, and empowers people living in surrounding communities to protect themselves from the ensuing pollution.