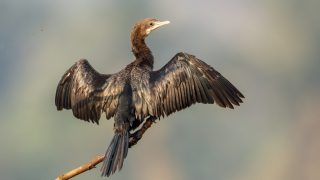 PORTLAND, Ore. — Conservation groups today called for an investigation after agency documents, released last week under court order, showed that killing double-crested cormorants will not benefit salmon and steelhead in the Columbia River Basin. The U.S. Fish and Wildlife Service’s own biologists found that fish not eaten by cormorants would be eaten by other predators, but nevertheless authorized the killing of more than 10,000 double-crested cormorants and destruction of more than 26,000 cormorant nests on East Sand Island near the mouth of the Columbia.

“Dead set on killing cormorants, the Service ignored its own science,” said Collette Adkins, an attorney and biologist at the Center for Biological Diversity. “The agency’s own analysis makes clear that its cormorant-killing program is doing nothing to help endangered fish. My heart aches for all the birds that have needlessly suffered and died. The killing needs to stop now.”

Scientists with the Fish and Wildlife Service concluded in a 2014 report that salmon and steelhead mortality due to cormorant predation is “completely compensatory.” See the report and timeline. This means that fish eaten by the birds would have died anyway of other causes—primarily consumed by fish and other predators—making it worthless to kill cormorants to increase salmon and steelhead runs.

The report states that “efforts to reduce predation by double-crested cormorants are expected to result in no changes or benefits to these fish populations in terms of increasing adult returns or abundance.” In contrast, the report concludes that “efforts to reduce mortality during passage through the hydro system are expected to result in increased productivity and abundance of steelhead.”

“The Service’s analysis confirms what we’ve argued for years,” said Bob Sallinger, Audubon Society of Portland conservation director. “The federal agencies responsible for recovering endangered fish should take steps to save salmon and steelhead by improving federal dam operations rather than making native birds the scapegoats for human-caused declines in Columbia Basin salmon runs. This is a senseless slaughter and the government knew it and chose to conceal this information during the public process.”

This spring several conservation groups filed a lawsuit against the Service, the U.S. Army Corps of Engineers and U.S. Department of Agriculture Wildlife Services to stop the slaughter of thousands of double-crested cormorants in the Columbia River basin. The lawsuit asserts that the federal agencies are scapegoating the native birds for salmon declines when the real threat is mismanagement of the federal hydropower system. Through this litigation the court ordered the Service to release documents related to whether its cormorant-killing program will actually increase returns of adult fish, which led to last week’s release of the federal scientists’ analysis.

In today’s letter, conservation groups called on Dan Ashe, director of the U.S. Fish and Wildlife Service, to investigate why this information was not disclosed during the public process that led to the decision to kill cormorants on East Sand Island. The groups also demanded that the Service withdraw permits allowing the US Army Corps to kill cormorants on East Sand Island, given the documented lack of scientific justification. So far this year, the federal agencies have killed more than 100 adult birds and destroyed thousands of nests, with more killings planned.