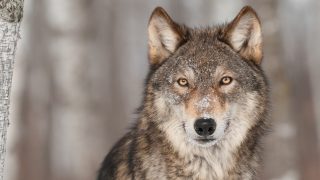 First the good news. The U.S. Fish and Wildlife Service (USFWS), which manages our nation’s National Wildlife Refuges, has issued new regulations for Wildlife Refuges in Alaska that end some of the most egregious forms of wildlife killing permitted and promoted by the state of Alaska.  Specifically, the new rules “prohibit the take of mother bears and their cubs, the take of brown (grizzly) bears over bait, the killing of wolves and their pups at den sites, and aerial gunning” on any National Wildlife Refuge in Alaska.

The USFWS rules were necessary because the federal agency allows the state of Alaska to manage wildlife on National Wildlife Refuges within the state. And Alaska’s wildlife policies regard wolves and bears as competition with human hunters for prized hunting targets, like moose and caribou. Thus they have “managed” wolves and bears to severely limit their numbers, by allowing extreme methods of killing including those listed above, as well as outrageously long hunting and trapping seasons (for wolves this often means no limits on the number you are allowed to kill). The state has even hired marksmen to shoot wolves and bears from helicopters and airplanes.

While this war on Alaska’s wildlife will continue on state lands and other federal lands, like those managed by the Bureau of Land Management, the rule change still matters. Alaska’s National Wildlife Refuges comprise more than half of all the National Wildlife Refuge land in the country – nearly 77 million acres. That’s about 18% of all land in the state. And much of that land is excellent habitat for these species.

Time to celebrate, right? Maybe. Here’s the bad news. Even as these new, minimal protections are being put in place, both the U.S. House and Senate FY17 Interior Appropriations bills (the bills that fund the entire federal government) contain “riders,” sneaky amendments, which would block the implementation of this rule. Riders are attached to “must-pass” legislation like funding bills, because it is very difficult to remove them from such sweeping matters.

That means that members of the Congress in both the Senate and the House of Representatives want the massacre of wolf pups in their dens, bear mothers and their cubs, the baiting of bears for the kill with garbage and even shooting from aircraft to continue on our National Wildlife Refuges.