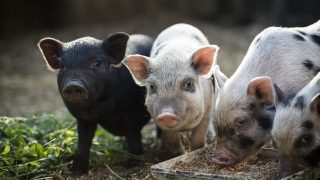 Summary: In the wake of the COVID-19 pandemic and mounting criticism of the dog meat trade from Chinese citizens, the national government of China has reclassified dogs from “livestock” to “companion animals.” In the U.S., some municipalities are grappling with whether pigs kept as companions should be allowed in residential areas that exclude animals legally defined as “livestock.” These developments invite us to think about the ways we categorize animals and how it affects their treatment and protections under the law. This is a two-part Animal Law Update. Part 1 is here.

Social construction — or the process by which people in a society create shared assumptions about reality — is an important factor that guides our relations with animals. These shared assumptions include normative ideas about which animals are companions and which are food. While societies often draw these boundaries between species, they can occur within the same species as well. These symbolic boundaries have important implications for animals’ treatment and protection under the law.

“Here Come All the Other Pig Parents”

Symbolic boundaries can at times blur, and such instances highlight their arbitrariness, as well as inconsistencies in our laws. While China is moving to reclassify dogs as companion animals, in the United States, some cities are redefining pigs as “pets” instead of “livestock” in the context of zoning laws. 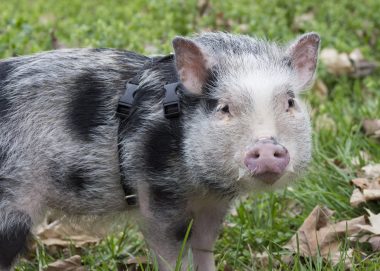 The impetus for these reclassification efforts is that zoning laws sometimes prohibit the keeping of animals legally defined as livestock1 in residential areas. So, people who keep pigs as companion animals in these jurisdictions may be fined and ordered to rehome their pigs.

In reporting on legislative efforts to address this issue, the Washington Post recounts the story of Virginia Beach resident Dani Guill, who received a visit from a zoning compliance officer after a neighbor complained that a pig lived in her house:

He wasn’t wrong. In fact, 3-year-old, 120-pound Pumpkin has her own bedroom and wardrobe. She loves Honey Nut Cheerios and acts grumpy when she doesn’t get as much as she wants. But unlike Guill’s dog, Pumpkin is not allowed to reside in Virginia Beach. City law views her as livestock, though she is a potbellied pig bred to be a pet.2

An order to relocate Pumpkin is on hold pending the outcome of a draft proposal to legalize keeping pigs in the city as companion animals. Since Guill began lobbying to change the law, she said several other pig guardians had come forward, telling the Washington Post: “Out of the woodwork, here come all the other pig parents.”

Some jurisdictions have no specific laws pertaining to keeping pigs as companions in residential areas, some prohibit them, and others allow them. In municipalities with “exotic animal” ordinances, pigs are sometimes defined as such3 and caregivers must obtain a special permit and an extra insurance policy.

Laws explicitly allowing companion pigs usually have restrictions, typically based on height, weight, or the number of pigs a household may care for, which may be based on property size. As with dogs, breed restrictions can apply to companion pigs as well.4 It is common for municipal codes to allow only certain breeds, such as Vietnamese potbellied pigs. 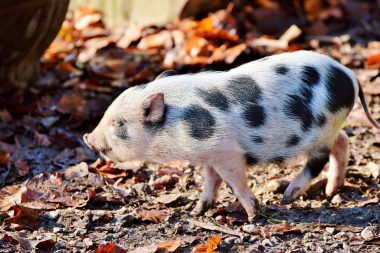 The Virginian-Pilot in 2018 covered the plight of a family forced to relocate their companion pigs in part because of breed restrictions in their town’s municipal code. Although the law allowed pigs to be kept as companion animals in residential areas, it limited the number of pigs and only permitted one breed. This family had the wrong breed (Juliana instead of Vietnamese potbellied) and one too many pigs (three rather than two).

The family was charged with a misdemeanor and fined $250. They also had to relocate their pigs out of state. Their town’s municipal code has since been changed to allow Juliana pigs and similar breeds. The pigs’ caregiver told the newspaper: “Pigs are like dogs, only smarter and cleaner. They’re inquisitive and cuddly. It’s hard not to fall in love with them. They make great companions.”

A petition to legalize companion pigs in Virginia Beach refers to them as “porcine family members” and includes the following facts and tips: 5

Disputes over the boundary between farmed animals and companion animals are becoming more common, and cities have thus far handled the issue differently. According to the Washington Post:

It’s hardly an unusual municipal matter. Across the nation, pet pig owners are forcing cities and towns to grapple with the definition of swine and reassess zoning laws written in eras when the divide between pets and farm animals was far starker. In the past year, pet pig legalization has been on the agenda in Holland, Mich., Brookhaven, Ga., and Chatfield, Minn. — all of which decided to allow pigs. In Amherst, N.Y., and Eureka Springs, Ark., officials did the opposite, upholding bans and calling for the ouster of outlaw pigs. Officials in other places are still mulling what to do.

While advocates for keeping pigs as companion animals usually focus on Vietnamese potbellied pigs and try to differentiate them from “farm pigs” for strategic reasons, they are not significantly dissimilar except in size. While a different breed, potbellied pigs are the same species as pigs commercially raised and killed for food, and they share similar traits. 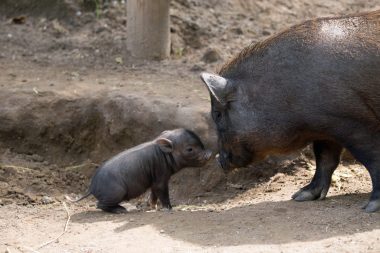 Potbellied pigs originally were bred for meat in Vietnam before being exported to other countries, eventually including the U.S. where they became a fad pet in the 1980s. The Pig Site notes that “because pot-bellied pigs are the same species as ordinary farmyard pigs and wild boars, they are capable of interbreeding. Most potbellied pigs have been crossed with various farm pig breeds.”

This is true of dogs breeds well. For example, breed specific restrictions often pertain to “pit bull type” dogs; however, this is not a scientific designation and fair and rational enforcement of these laws is virtually impossible. In addition, they are unfairly discriminatory on their face. For this and other reasons (e.g., studies showing they are ineffective at their intended public safety goals) many jurisdictions in the United States and worldwide have repealed their breed-specific ordinances pertaining to dogs.

Although these conflicts over zoning laws challenge the boundary we place between companions and farmed animals, here, the differentiating factor used to justify whether a particular pig is categorized as a “pet” versus “livestock” remains how much a human cares about them, rather than an inherent trait of the animal.

For example, the above petition argues that potbellied pigs are not livestock for the circular reason that “people who have them as pets are not raising them for food.” The same could be (and has been) said about dogs. Arguments that some pigs are raised to be food, while others are raised to be companions, strive to lend an aura of inevitability, permanence, and “naturalness” to categories that are socially constructed, rather than inherent to the animals themselves.

The contested definition of “companion animal” in these situations has further ramifications beyond the context of zoning regulations.

The relatively narrow issue of allowing pigs and other farmed animals in residential areas via local zoning laws does not address their treatment under state or local animal cruelty codes.

Because cruelty laws are separate from zoning laws, farmed animals kept as companions may still receive differential, lesser protection due to common exemptions pertaining to farmed animals or agricultural practices. Many of these exemptions are written into the law, but even when they are not, prosecutors often do not pursue animal cruelty charges involving farmed animals.

In addition, there may be other cruelty and neglect issues that arise by virtue of whether these animals  prefer to live in such close proximity to humans, how much space they need and want, and other questions related to their well-being by virtue of their species-specific needs. Countless dogs, cats, and other companion animals endure lives of unrecognized neglect, isolation, or worse at the hands of irresponsible guardians.6 Could the situation be even worse for large animals like pigs, whose needs may be less well understood and more difficult to accommodate in a suburban setting? 7

Even though potbellied pigs are typically smaller than pigs raised for agriculture (who are bred to grow unnaturally large, unnaturally quickly), they are typically bigger than an average dog and can reach 200 pounds or more. Pigs kept as companions (who are frequently adopted as small piglets) are often abandoned when they grow larger than expected, either due to unscrupulous breeding, deceptive marketing, caregiver ignorance, or both. This puts a strain on shelters and sanctuaries and leads to companion pigs being killed for lack of suitable homes.8

In addition, laws that allow companion pigs often restrict the number of pigs that can be kept in a household. In considering the well-being of companion pigs, that number ideally should never be “one.” As herd animals, pigs are happier in pairs or small groups and local regulations should take this into account.9

Setting aside questions about the welfare of pigs in residential settings, conflicts over the definition of “companion animal” invite us to question how we categorize animals and why these categories result in such different treatment under the law. Legal protections should be based on animals’ ability to feel pleasure and pain, not on the ways that humans use them. And on this point the science is clear — the animals we raise for food have the ability to suffer and experience happiness just like the animals we call companions.

A Virginia Beach animal control officer, skeptical of efforts to reclassify pigs as companion animals, told the Virginian-Pilot the fact that pigs are “very smart” presents a problem for law enforcement. This same trait is one of the reasons keeping pigs in intensive confinement on factory farms is inherently cruel and detrimental to their mental well-being. But the labels we place on animals — even members of the same species — based on whether we see them as sources of friendship or profit can encourage their intellectual and emotional capacities to be either celebrated and respected, or overlooked or ignored.

The small number of farmed animals fortunate enough to be allowed to live out their lives in sanctuary settings and as social media celebrities like Esther the Wonder Pig 10become ambassadors of sorts, inviting people to perceive farmed animals in a different light. Farmed animal sanctuaries and caregivers like Esther’s, who share their pig’s story with the world and are committed to her well-being,11 play an important role in drawing attention to the boundaries we construct between species. 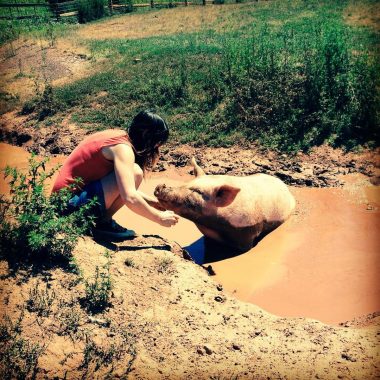 They do this in part by giving a name and a biography to the countless unique animals who are denied their individuality in an industrial agriculture system that treats them like cogs in a machine. The opportunity to interact with rescued farmed animals invites visitors to reflect on these boundaries and question why they result in such different treatment under the law — despite the fact that these animals experience the world similarly.

The Animal Legal Defense Fund is working toward a future where the interests of all animals — regardless of their societal classification — are recognized and respected under the law. Ways we do this include strategic litigation to improve the legal status of all animals, including farmed animals, and legislative work to remove common exemptions in animal cruelty laws that exclude “standard agricultural practices” and leave farmed animals vulnerable to abuse. We also have created farmed animal cruelty prosecution guides to assist prosecutors and law enforcement with the various stages of animal cruelty cases involving farmed animals. And we educate students, attorneys, advocates, the general public, and key decisionmakers about legal issues affecting animals via our Animal Law Academy webinar series. To see a list of our free upcoming webinars, visit: www.aldf.org/academy.