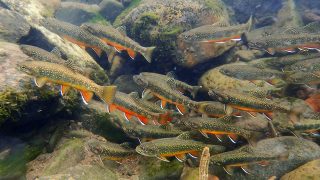 “We’ve been using the same laws for decades to try and protect Lake Erie. They’re clearly not working. Beginning today, with this historic vote, the people of Toledo and our allies are ushering in a new era of environmental rights by securing the rights of the Great Lake Erie.”
—Toledoans for Safe Water activist Markie Miller in a press release

On February 27, 2020, a federal judge struck down as unconstitutional a first-of-its-kind law granting basic rights to Lake Erie. Toledo, Ohio, voters passed the “Lake Erie Bill of Rights” (LEBOR) — designed to protect Lake Erie from pollution — via ballot initiative during a special election on February 26, 2019.

The LEBOR amended Toledo’s municipal charter to recognize rights for Lake Erie (including legal standing) and empowered the city and its residents to sue on behalf of the lake. Proponents argued the legislation was necessary because the state had consistently failed to protect Lake Erie from pollution, leaving the city’s water supply vulnerable to contamination.1

The bill of rights established:

Irrevocable rights for the Lake Erie Ecosystem to exist, flourish and naturally evolve, a right to a healthy environment for the residents of Toledo, and which elevates the rights of the community and its natural environment over powers claimed by certain corporations.

Agricultural company Drewes Farms immediately challenged the legislation, filing a lawsuit against the city of Toledo the day after the election. The state of Ohio later joined the suit as a co-plaintiff. U.S. District Judge Zouhary sided with the plaintiffs, ruling the LEBOR was unconstitutionally vague and exceeded Toledo’s municipal authority.

The LEBOR was the first law in the U.S. to acknowledge rights of an entire specific ecosystem, according to the Community Environmental Legal Defense Fund (CELDF), which helped draft the amendment. The legislation was spearheaded by local advocates Toledoans for Safe Water with support from CELDF, which works globally to advance the rights of nature.

The LEBOR received international attention as part of the emerging “rights of nature” or “environmental personhood” movement, in which entities of nature — such as lakes, rivers, and forests — have been granted legal personhood to provide expanded protections from pollution and other harms. A patchwork of similar legislation has appeared around the world and in some communities in the U.S. in recent years.2 These efforts have been driven by several environmental and socio-legal factors, including the climate crisis and a growing awareness that existing environmental protection laws have fallen short of their intended goals.

Rights of nature laws also reflect an evolving legal paradigm of which efforts to elevate animals’ legal status are a part. Environmental and animal personhood constructs recognize the intrinsic rights of natural entities and animals, respectively, to exist and flourish in themselves — apart from humans’ self-interest in them as resources whose worth is determined by their perceived economic or social value.

In an eight-page opinion, Judge Zouhary ruled the LEBOR preempted state law and was impermissibly vague in violation of Fourteenth Amendment rights to due process. Of the vagueness charge, he found that the rights afforded to the lake were “aspirational” and lacked practical meaning:

LEBOR’s authors failed to make hard choices regarding the appropriate balance between environmental protection and economic activity. Instead, they employed language that sounds powerful but has no practical meaning. Under even the most forgiving standard, the environmental rights identified in LEBOR are void for vagueness. The right of Toledoans to “self-government in their local community” is impermissibly vague as well. . . . Like LEBOR’s environmental rights, this self-government right is an aspirational statement, not a rule of law.

He also found that Toledo had overreached its municipal authority:

The LEBOR’s attempt to invalidate Ohio law in the name of environmental protection is a textbook example of what municipal government cannot do. Lake Erie is not a pond in Toledo. It is one of the five Great Lakes and one of the largest lakes on Earth, bordering dozens of cities, four states, and two countries. That means the Lake’s health falls well outside the City’s constitutional right to local self-government. . . . Consequently, municipal laws enacted to protect Lake Erie are generally void if they conflict with Ohio law.

Judge Zouhary noted that the goal of the legislation was laudable and that “with careful drafting, Toledo probably could enact valid legislation to reduce water pollution.” He cited a 2004 Madison, Wisconsin, ordinance that restricted the use of certain fertilizers within city limits, noting that it had survived a similar lawsuit. “In contrast,” he concluded, “LEBOR was not so carefully drafted. Its authors ignored basic legal principles and constitutional limitations, and its invalidation should come as no surprise.”3

Although the LEBOR as written did not survive this legal challenge, advocates will undoubtedly continue efforts to obtain legal recognition for certain rights of nature.4

Environmental Personhood and the Rights of Nature

The beginning of the movement to recognize rights of nature is often traced to 1972, with the U.S. Supreme Court case Sierra Club v. Morton, which asked who has standing to sue on behalf of the environment, and the publication of law professor Christopher Stone’s influential article — which addressed the same question — “Should Trees Have Standing?”

In her 2017 article, “Environmental Personhood,” Gwendolyn Gordon writes about the evolution in thinking about environmental protection that has occurred since Stone’s article was first published—from a wholly anthropocentric view to consideration of nature’s own interests:

Over time, the focus of legal and scholarly attention to the protection of nature has moved from being entirely focused on human interests in exploiting nature, to protecting nature for future human generations, to conceptions that allow for nature to be protected as intrinsically valuable. In contrast with previous “purely anthropocentric” views, often tied closely to utilitarian arguments, environmental personhood has gained currency contemporaneously with scholarly reevaluation of the place of human interests in relation to nature – a reevaluation that gives new life to Christopher Stone’s 1972 argument that trees should have standing to litigate their own interests. (pp. 25-6)

The shift away from an anthropocentric view of nature grounded solely in human interests has paralleled similar efforts to improve the legal status of animals. In contrast to the animal protection movement, the environmental movement has historically aimed to protect ecosystems and entire species rather than individual animals. However, efforts to expand basic rights of the natural environment and animals — and elevate their status beyond property — can provide mutual benefits and greater protection for both from exploitation and harm. In addition, efforts to protect natural spaces directly affect animals because they are part of the environment.

While Stone’s treatise played a key role in igniting the environmental law movement in the U.S., the underlying ideas originate with indigenous cultures. Lidia Cano Pecharroman (2018) notes that:

It would not be fair to talk about the legal doctrine of the rights of nature without mentioning the traditions and knowledge on this issue that indigenous populations have passed onto generations. The paradigm that embraces and understands nature as a being with rights has been part of many indigenous populations’ worldviews for hundreds of years. (p. 6)

Indeed, some of the most recent environmental personhood decisions have been granted under tribal law. For example, in 2019, the Yurok Tribe in Northern California granted personhood to the Klamath River — believed to be the first river in North America to be granted such rights.

Whether discussing legal personhood for rivers, trees, or animals, it is important to note that there are already non-human persons under the law. For example, corporations and ships are defined as persons for limited legal purposes. Many point to the existence of corporate personhood to support claims for a similar status for the environment and animals — especially since corporations are responsible for significant harm to both.

This issue was raised by Justice William O. Douglas 47 years ago in Sierra Club v. Morton. Although in this case the Supreme Court found that the Sierra Club did not have standing to sue on behalf of the Sequoia National Forest, Justice Douglas, in a well-known dissenting opinion, argued environmental objects should be granted legal personhood, and therefore standing, to sue for their own preservation. He noted that inanimate objects such as ships and corporations have the ability to be parties to litigation, and therefore so it should be with natural features. Underscoring the many animals (including “man”) who are dependent on ecosystems like rivers or simply enjoy them, Justice Douglas wrote “the voice of the inanimate object, therefore, should not be stilled.” (Sierra Club v. Morton, 405 U.S. 727, 1972)

Elevating the status of the environment and animals to recognize their basic rights could theoretically level the playing field, granting a means to challenge profit-driven exploitation by politically powerful industries when current substantive and procedural laws are inadequate.

Protecting the Environment and Animals

The Animal Legal Defense Fund uses a wide variety of laws to protect animals and advance their legal status.5 In addition, we use litigation to protect the environment and the animals who live there. For example, in 2018, we filed a groundbreaking lawsuit to compel the federal government to take action on climate change in order to preserve natural spaces. The lawsuit employs the novel legal argument that as society becomes increasingly urbanized, the only place where the constitutionally protected right to liberty truly exists is in America’s public lands. As Animal Legal Defense Fund Executive Director Stephen Wells explained: “By safeguarding the necessary habitats to sustain wildlife, we will also be upholding Americans’ right to seek happiness, liberty and solitude in nature.”

We also use existing environmental laws where we are able to protect animals. For example, we have an active lawsuit against the USDA’s Wildlife Services, arguing the agency failed to comply with the National Environmental Policy Act (NEPA) by not considering the environmental effects of its lethal “wildlife management” programs. We are also suing the USDA’s Farm Service Agency, challenging a regulation it issued in 2016 exempting certain factory farms from environmental review under NEPA. And in 2018, with a coalition of public interest groups, we challenged the federal government’s waiver of environmental laws related to construction of a border wall between the U.S. and Mexico that would negatively affect thousands of animals.

As the legal doctrine of environmental personhood continues to develop, we can expect to see more legislative efforts to recognize the rights of nature. Such efforts are important because laws that protect ecosystems also protect the animals who live there.

The emerging movement to grant features of the environment basic rights also parallels efforts in the animal law movement to obtain a status for animals beyond mere property and closer to legal personhood. Legal personhood is one end of a continuum granting an entity — whether human, animal, or natural feature — protections from exploitation and harm based on their intrinsic value “in themselves” rather than their value (instrumental or economic) to others.