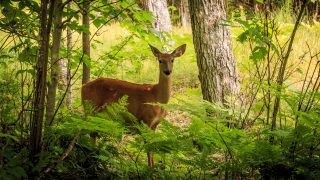 Lawsuit aims to ensure that the government protect the environment for the benefit of animals, thus making laws that are more protective of humans.

Washington, D.C. – The Animal Legal Defense Fund filed a lawsuit to protect Americans’ right to be let alone and compel federal government action on climate change. The plaintiffs include scientists, nature enthusiasts, and wildlife advocates who are no longer able to safely conduct their research or interact with nature because of the increased severity of wildfires, mudslides, and avalanches; disappearing snowpack and edible plants; and flash flooding, all of which have been altered due to damage caused by climate change.

“The Animal Legal Defense Fund is leading the charge on this groundbreaking claim because it is time to reevaluate the standards by which we protect our wildlands,” said Animal Legal Defense Fund Executive Director Stephen Wells. “By safeguarding the necessary habitats to sustain wildlife, we will also be upholding Americans’ right to seek happiness, liberty and solitude in nature.”

The legal actions rely on the constitutionally established right to liberty, which courts have called the right to be let alone. As society becomes increasingly urbanized and digitally connected, the only place where the right to liberty truly exists is in America’s public lands. Anthropogenic climate change, however, is damaging once pristine natural areas, making them more dangerous and less navigable by humans and animals alike due to increased incidences of catastrophic wildfires, unexpected ice melts, and flash flooding that results in the terrain being unreachable. While humans have the potential to adapt with the help of science and technology, wildlife is less adaptable to these relatively rapid shifts in their environment.

The complaint uniquely connects decades of federal inaction to cut greenhouse gas emissions with the resulting decline in Americans’ ability to enjoy their right to be let alone in the wilderness due to the adverse effects of climate change on these natural places. The lawsuit details how the government has failed to adequately address greenhouse gas emissions while also providing institutional support, including direct and indirect subsidies using public funds for industries that are the greatest producers of these pollutants. For the plaintiffs, one of the most detrimental effects has been a shortened window in which conditions are suitable for accessing wildlands. As a result, areas that are more reachable are becoming increasingly crowded, reducing the level of solitude one can find while also speeding up the degradation of these lands.

The coalition of organizations and individuals involved in the lawsuit includes the Animal Legal Defense Fund; Seeding Sovereignty; Leslie Patten, a Wyoming-based author; Will Gadd, an accomplished outdoor adventure athlete; and Ian Petersen, an avid backpacker and Master’s student from Oregon.