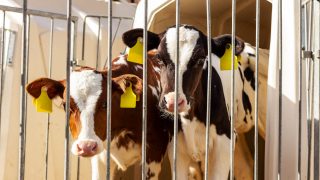 Today the U.S. District Court for the Southern District of Iowa issued a preliminary injunction, preventing the state from enforcing its new Ag-Gag law while the lawsuit proceeds. The court also denied the state’s attempt to have the lawsuit dismissed. Pending final resolution of the case, the court’s decision will allow lawful undercover investigations and reporting to resume in Iowa.

Iowa’s second Ag-Gag law is substantively similar to a first which also criminalized investigations at factory farms, slaughterhouses, and puppy mills, and which was struck down by the same federal court on January 9, 2019. Federal courts have similarly struck down Ag-Gag laws in Idaho and Utah as unconstitutional.

“Ag-Gag laws threaten animals, food safety, workers’ rights, and the environment, and federal courts have consistently ruled that they also violate the Constitution,” says Animal Legal Defense Fund Executive Director Stephen Wells. “Iowa’s lawmakers keep wasting taxpayer dollars enacting and defending these unconstitutional laws, but we have the law on our side.”

In March, Iowa lawmakers enacted their second Ag-Gag law, which creates the new crime of “agricultural production facility trespass” — making it illegal for a person to gain access to an agricultural production facility through deception if the person intends to cause an “injury” to the “business interest” of the facility. Because exposing horrific abuses, such as slamming piglets into concrete floors and confining animals in cages so small that they cannot stand up or turn around, inevitably damages a business’ reputation, the second Ag-Gag law unmistakably targets undercover and whistleblower investigations, a blatant attempt to circumvent the federal court’s previous ruling and unconstitutionally stifle free speech.

Both lawsuits were brought by a coalition of public interest groups composed of the Animal Legal Defense Fund, the ACLU of Iowa, People for the Ethical Treatment of Animals (PETA), Public Justice, the Center for Food Safety, Iowa Citizens for Community Improvement, and Bailing Out Benji.

Undercover investigations have a long and treasured history in this country, and serve as one of the few avenues through which the public receives critical information about animal agriculture. Iowa’s previous Ag-Gag law achieved its goal of suppressing undercover investigations, which ceased when the law went into effect in 2012.

Iowa’s first Ag-Gag law was the third to fall nationally. The Animal Legal Defense Fund led successful challenges in Idaho and Utah, and litigation is pending against Ag-Gag laws in North Carolina, Kansas, and Arkansas. In each of these victories, the courts recognized that even deception can be protected by the First Amendment, lest we give the government the power to throw people in prison merely for the white lies often necessary to gain access and shine a spotlight on factory farm abuses through undercover investigations.