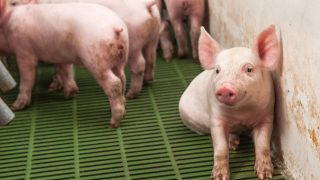 On January 9, a federal court struck down Iowa’s “Ag-Gag” law, which criminalized undercover investigations at factory farms, slaughterhouses, and puppy mills. The law was a transparent effort to suppress free speech about the often horrific conditions that animals endure in industrial animal agriculture.

Despite that loss, or more accurately because of it, the Iowa Legislature is now considering legislation to the same end — attempting to circumvent the federal court decision. Introduced Monday and racing through Iowa Senate and House committees to meet Friday’s deadline for committee approval, House File 649 and Senate Study Bill 1227 would criminalize undercover investigations by journalists and advocates. This is a misguided move that would again violate the Constitution and cost taxpayers hundreds of thousands of dollars in legal fees.

The new bill would make it a crime for a person to gain access to an agricultural production facility through deception if the person intends to cause an “injury” to the “business interest” of the facility.

Of course, when undercover investigators expose horrific abuse, as when an investigation at an Iowa Hormel supplier revealed workers beating young pigs and sticking clothespins into pigs’ eyes, the natural effect of such investigations is to injure the business reputation of the investigated facility – and rightfully so. Undercover investigations have a long and treasured history in this country, one that is protected by the First Amendment’s guarantee of free speech and a free press.

Iowa’s is the third Ag-Gag law to fall thanks to challenges led by the Animal Legal Defense Fund. Courts struck down similar laws in Utah and Idaho, and litigation is pending against Ag-Gag laws in North Carolina and Kansas. In each of these victories, the courts have recognized that even deception is protected by the First Amendment, lest we give the government the power to determine the truth and throw whoever disagrees in prison.

Attempts to defend these unconstitutional laws have not only been unsuccessful, they have been expensive. If Iowa passes a new Ag-Gag law, another round of expensive litigation is guaranteed. And the plaintiffs are likely to win, given the weight of precedent already on the side of openness and transparency in an industry that is desperate to keep the consuming public in the dark, alongside the animals it mistreats. Iowa’s taxpayers will once again have to foot the bill for their elected officials’ efforts to strip them of their constitutional rights.