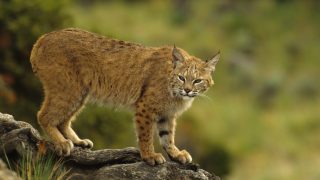 In addition, the letter asks that prior to further killing of wildlife by Wildlife Services, appropriate environmental review and resource allocation be undertaken, according to California state law. The Board of Supervisors was scheduled to decide at its meeting on Tuesday, May 21 in Santa Rosa whether to renew their contract for the fiscal year 2013-2014, but on May 20 the meeting was cancelled.

Every year in Sonoma County, Wildlife Services kills hundreds of large predators like mountain lions, bobcats, and coyotes. Indiscriminate methods used by Wildlife Services have killed over 50,000 non-targeted animals in the U.S. in just over a decade. The agency regularly deploys cage, steel-jaw, and “Conibear” traps and wire snares, which maim and trap animals who may take several days to die. These devices have injured hikers and killed pets, not only in wilderness or rural areas, but often in populated suburban landscapes.

California state law has banned many of these methods, including cyanide and leg-hold traps and the use of dogs to hunt predators. Unlike Sonoma County, neighboring Marin County does not employ Wildlife Services for predatory animal control. Instead, Marin uses a non-lethal program that has allowed some ranchers to see predation-losses decrease by over 60%.

Wildlife Services has received public scrutiny recently, when Wildlife Specialist Jamie P. Olson posted pictures on Twitter of his hunting dogs mauling a coyote caught in a leg-hold trap while on duty.

Another Wildlife Services employee, Russell Files, was recently arrested and charged with animal cruelty for intentionally capturing his neighbor’s dog–while on duty–in multiple leg-hold traps. Since 2000, Wildlife Services has targeted and killed nearly one million coyotes and thousands of other predators including black bears, bobcats, foxes, and badgers in the U.S.

“The recklessly cruel and ineffective methods used by the USDA’s Wildlife Services do not reflect Sonoma County’s concern for its wildlife, ecosystems, and habitats,” said Stephen Wells, executive director of Animal Legal Defense Fund. “Wildlife Services’ disregard for wildlife and ecosystems shows the agency is not accountable to the citizens of California, and we believe Californians deserve better.”