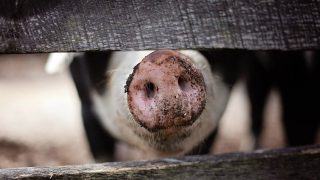 “These backyard slaughter operations torture and illegally slaughter animals, including pigs, goats, horses, and chickens, and then sell the meat to the public,” says Animal Legal Defense Fund Executive Director Stephen Wells. “The horrific cruelty occurring at the slaughter operations is an affront to compassionate Florida residents who demand that their state laws be enforced.”

The Florida Humane Slaughter Act requires animals be unconscious and rendered insensitive to pain prior to slaughter. The law also prohibits people from shackling or hoisting animals with the intent to kill without first rendering the animal insensitive to pain. However, videos of workers at these backyard slaughter operations reveal that animals routinely regain consciousness mid-slaughter. Workers stab squealing pigs repeatedly in the chest and throat, and skin animals, such as goats, while they are still kicking and showing signs of life. Conscious pigs, goats, and other animals are dragged from holding areas to slaughter by their heads and tails, often using large metal hooks.

The cries and squeals of animals being killed are so loud and prolonged that residents and visitors to the neighborhood have started to cry after hearing the animals’ distress. In one case, a worker took 30 minutes to cut off a pig’s testicles. In other cases, live chickens and ducks have been thrown into a bucket with dead birds to bleed out. Companion animals, including dogs and ponies, are also being neglected on the slaughter operation properties.