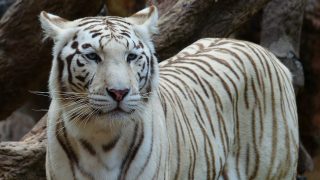 The tigers—who have never had adequate access to sunlight, fresh air or natural surfaces—have been housed indoors at the Downtown Aquarium and restaurant for 12 years.

The motion was filed by Houston law firm Ahmad, Zavitsanos, Anaipakos Alavi & Mensing P.C., or AZA, under the Texas Anti-SLAPP (Strategic Lawsuits Against Public Participation) statute. This law allows judges to dismiss meritless lawsuits filed against those who speak out about a “matter of public concern.”

The Animal Legal Defense Fund announced its concerns about the four tigers in September when it delivered a 60-day notice of intent to sue—as required by the federal Endangered Species Act (ESA)—on behalf of Cheryl Conley, a Montgomery County woman who says she witnessed violations of the ESA at the downtown facility. Before the 60-day-notice period expired, Landry’s pre-empted the organization and Ms. Conley by suing for defamation.

“This is a blatant attempt to silence free speech,” says Animal Legal Defense Fund Executive Director Stephen Wells. “Baseless lawsuits like this are often used in an attempt to intimidate and silence advocates—which is exactly why Texas has an anti-SLAPP law. Our primary concern is the health and well-being of the tigers—and we will not be deterred.”

AZA lawyer Adam Milasincic argues that Landry’s and its CEO and owner Tilman Fertitta, star of a reality TV show “Billion Dollar Buyer,” are public figures which makes discussions of the tigers’ confinement a public concern even beyond the concern about the tigers’ welfare.

“This suit’s intention is to dissuade animal advocates from starting a public dialogue about the care and environment these tigers are entitled to under federal law— including the protected right to thrive,” says Mr. Milasincic.

The anti-SLAPP law allows not only for dismissal of meritless lawsuits, but for fines against those who use them to silence free speech. Ms. Conley filed a separate anti-SLAPP motion requesting dismissal. Her lawyer Ashish Mahendru of Mahendru P.C. calls Mr. Fertitta a “Billion-Dollar bully.” Mr. Mahendru’s motion asks for fines and for Landry’s to be forced to “shut down the tiger enclosure as a sanction for the malicious use of the judicial system to silence its critics. Otherwise, it’s not simply the tigers who are condemned to imprisonment. It’s also the rights of noble citizens like Cheryl Conley that are being violated.”