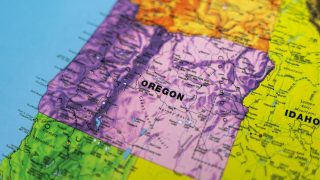 The Animal Protection Laws of Oregon compendium contains the general animal protection and related statutes for Oregon with an effective date on or before September 1, 2020.

Prohibits persons from conducting or participating in events that have the goal of taking coyotes for cash or prizes (HB 2728)
Killing contests refer to events or tournaments where participants compete to kill as many animals as possible during a specified time period. Cash and prizes are awarded to those who kill the most animals or the largest or smallest animal. HB 2728 would prohibit coyote killing contests in Oregon.
Read More

Justice v Gwendolyn Vercher
In 2018, the Animal Legal Defense Fund filed a groundbreaking lawsuit on behalf of an 8-year-old horse named Justice. If successful, this lawsuit will be the first to establish that animals have a legal right to sue their abusers in court.
Read More

The Oregon Legislature is considering a bill (HB 2728) that would ban coyote killing contests — the most common species targeted by these cruel events. This bill recently passed the House of Representatives and is now in the Senate.
Take Action