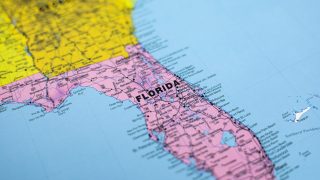 The Animal Protection Laws of Florida compendium contains the general animal protection and related statutes for Florida with an effective date on or before September 1, 2020.

Recognizing the Right of Waterways to Be Free of Pollution (Orange County, Florida)

Amendment 13 – public vote
The end of the Florida greyhound racing industry ensures that thousands of dogs will no longer be subjected to cruelty in the name of entertainment.
Read More