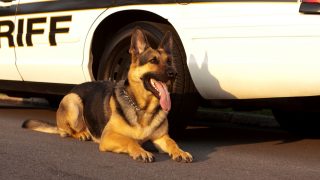 The Care for Retired Law Enforcement Dogs Program Act would create a program to provide funding for the veterinary care of dogs formerly used in law enforcement. (H.B. 25/S.B. 226)

Dogs used in law enforcement may live for years in adoptive homes following their “retirement.” A new Florida bill, the Care for Retired Law Enforcement Dogs Program Act (H.B. 25/S.B. 226), would provide funding to pay for their ongoing veterinary needs.

Dogs used in law enforcement commonly “retire” between the ages of eight and 10, though some K-9 “careers” end earlier due to injury. The work of a law enforcement dog is strenuous and highly physical, which can take a long-term toll on their bodies and may even lead to more acute issues such as back, hip, and dental problems. In some cases — such as that of Ax and Endo, law enforcement dogs who were shot during the pursuit of a Volusia County carjacking suspect in September — dogs may be injured on the job, potentially requiring a higher level and cost of ongoing care. Most “retired” law enforcement dogs are adopted by their handlers, though in certain circumstances — such as the handler’s inability to adopt — they may be adopted into a different permanent home.

For dogs like Daro, who recently “retired” from the DeLand Police Department at the age of nine and was adopted by his former handler, the cost of care can be considerable. Under Florida’s current system, Daro’s guardian will be personally responsible for paying the dog’s vet bills. While some law enforcement agencies do provide funding for their canine retirees’ veterinary care, the majority do not.

If enacted, this legislation would establish the Care for Retired Law Enforcement Dogs Program, which would be situated within Florida’s Department of Law Enforcement and administered through a nonprofit corporation. The program would be allocated $300,000 per year, which would be used to fund up to $1,500 of veterinary expenses annually for each eligible dog who served in a Florida law enforcement agency for at least five years. It would go into effect on July 1, 2022.