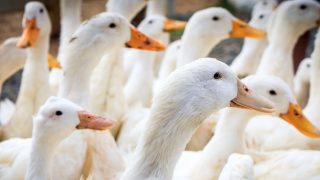 HB 6663 passed the House, and is now up for consideration in the Senate

Foie gras is a cruelly-produced food, sometimes considered a “gourmet” delicacy, that comes from force-feeding young ducks and geese until their livers swell to eight times their natural size. The Force-Fed Poultry Products Act (HB 6663) would prohibit restaurants, grocery stores, and other food retailers in Rhode Island from selling any force-fed poultry product or food containing a force-fed poultry product.

Birds raised for foie gras endure multiple force-feedings each day for several weeks prior to slaughter, during which a thick pipe is rammed down their throats and huge amounts of grain are pumped into their stomachs. Infection and painful wounds in the beak and throat are common. Many ducks cannot move normally and become too heavy for their legs to hold them. Investigations into foie gras producers have revealed appalling conditions. For example, an investigation at Hudson Valley Foie Gras in New York documented living ducks tossed into garbage cans, struggling to breathe with untreated sores. 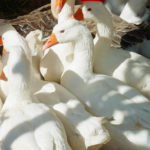 Help end this cruelty to ducks and geese by urging your state legislators to support the Force-Fed Poultry Products Act.

Foie gras has been banned in over a dozen countries as well as in California and New York City. Force-feeding typically damages the livers of the birds so badly it induces an extremely painful disease known as hepatic lipidosis. Additionally, scientific studies show that consumption of foie gras is associated with a fatal disease in humans called secondary amyloidosis. Hundreds of thousands of birds have been slaughtered and their diseased organs sold into the human food supply for the financial profit of foie gras producers.