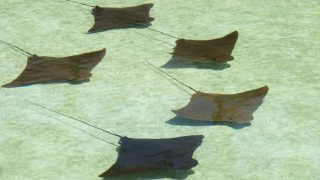 *UPDATE: Victory! Governor Hogan signed the cownose ray killing contest ban on May 4, 2017. Thank you for your support in protecting Maryland’s wildlife.

The Animal Legal Defense Fund opposes senseless and inhumane killing contests. That goes not only for the many throughout North America targeting coyotes—but also for those targeting the gentle and vulnerable cownose ray—relatives of sharks who migrate every year from the waters off Florida to birth their young and breed anew in the Chesapeake Bay.

Using bows and arrows, participants shoot the rays from boats and afterward club the still-living fish in the head. Since the contest is held in pupping season, contestants frequently kill newborns alongside adults. Video footage of the contest shows how needless and inhumane the annual event is.

Supporters of the contest insist that killing rays benefits oysters, blaming the rays for dwindling oyster harvests. But the National Aquarium in Baltimore says the science no longer supports that theory, and rays “play a part in the ecology of the Bay, and it’s a real danger to over-harvest them.”. [1] Dr. Dean Grubbs, a research scientist at Florida State, has published research explaining that disease, overharvesting, over-sedimentation and habitat loss have caused the decline in oyster populations [2]. Indeed, Grubbs cites prior research showing that less than 3% of cownose rays examined in the Chesapeake Bay had oysters or any other hard-shelled bivalve in their stomachs.

Under its misguided “Save the Bay, Eat a Ray” campaign, the State of Virginia spent tax dollars trying to market cownose ray as food in the U.S., Europe and Asia. It failed. These rays are apparently difficult to prepare and—no joke—taste like urine. Not even the killing contestants eat them: video footage shows them dumping the rays back into the water or tossing them into dumpsters, where they slowly suffocate [3].

So if there’s nothing to gain, why the killing contests? It is mere bloodsport, purely “entertainment.”

But humanely and ecologically unjustifiable entertainment. According to researchers, cownose rays are among the most vulnerable to population pressures of all cartilaginous fish, in part because they have extremely low birth rates: females don’t pup until they’re several years old, and even then give birth to just one pup a year. That contestants kill newborns puts more pressure on this vulnerable life cycle.

Whether it’s coyotes or rays, the sad truth is that the law in most places permits these killing contests. And where the Animal Legal Defense Fund cannot bring litigation, we have to think about legislative solutions.

That’s why the Animal Legal Defense Fund joined a coalition of partners in an effort to Save the Rays. Our coalition will endorse legislation soon to be introduced by Maryland Delegate Shane Robinson and Senator Ronald Young. That legislation will ensure that no one may sponsor, conduct or participate in any contest, competition, tournament or derby with the objective of catching or killing cownose rays in state waters for prizes or other inducement, or for entertainment.

When the legislation is introduced, we’ll ask our friends in Maryland to join us in lobbying Annapolis so that rays receive the same humane treatment we seek for all animals, whether by land or by sea.