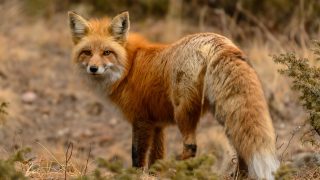 This week the Animal Legal Defense Fund called on a federal court to rule that current plans for a U.S. border wall are illegal. We filed a summary judgment “motion laying out the overwhelming case that the U.S. Department of Homeland Security (DHS) illegally sidestepped important environmental and animal protection laws in its plans to construct a wall along the U.S. border with Mexico.

A human-made barrier on the scale of the proposed border wall would have a serious impact on animals. Such a structure would cause immediate and long-term harm to countless species, including the more than 100 endangered or threatened species living along the border.

Animal families would be divided, breeding and migratory patterns would be disrupted, and many species like Mexican gray wolves, jaguars, and ocelots may be driven to extinction. As the nation’s preeminent legal advocacy organization for animals, the Animal Legal Defense Fund will not stand for a government plan that so plainly threatens animals and violates the law.

We first filed suit in September 2017, joining a coalition of wildlife protection groups to protect animals and enforce adherence to critical laws like the National Environmental Policy Act, the Endangered Species Act, and the Migratory Bird Conservation Act.

Our motion for summary judgment demonstrates that the government’s current plans for a border wall are an illegal use of the 2005 REAL ID Act, which deals with identification documents as well as immigration issues. It granted DHS extraordinary powers to waive a variety of laws, including those that offer vital protections for the environment and endangered species.

The power to waive so many laws was granted specifically to ensure the completion of certain sections of fencing, pursuant to 1996 and 2005 mandates to construct a physical barrier along particular stretches of the border. Now DHS is invoking those extraordinary waiver powers for projects far beyond the clearly intended scope of the REAL ID Act.

Our motion details the many ways DHS’s invocation of these waivers is illegal. In addition to the waivers not being justified in the context of the REAL ID Act, they also violate the Administrative Procedure Act.

Even beyond that, under the government’s interpretation, the REAL ID Act’s waiver-granting power would be unconstitutional in itself, rendering its application to the border wall plan void.

We urge the court to use its judicial authority to declare DHS’s conduct illegal and void.

The Animal Legal Defense Fund is committed to challenging this threat to animals, and will continue to update you on the case’s progress.