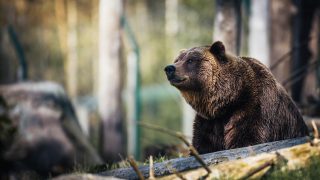 Does the law contemplate the welfare of wildlife in the wild?  On Monday, the Animal Legal Defense Fund, in collaboration with Friends of Animals and the Law Offices of Donald B. Mooney, filed a lawsuit in Sacramento arguing that it most certainly does.

We represent the Public Interest Coalition (a Placer County grassroots organization) in litigation challenging the California Fish & Game Commission’s recent decision allowing hunters to outfit their hunting dogs with GPS tracking devices and “treeing switches” (radio telemetry that tells a hunter when an animal might be treed).  The lawsuit alleges that the Commission violated the California Environmental Quality Act (CEQA) in failing to examine a range of ways their decision will significantly impact wildlife.

The new rule permitting GPS tracking devices effectively incentivizes hunters to use dogs more often, since such devices make hunting easier and basically eliminate the hunter’s ethical commitment to so-called “fair chase.”  Outfitted with GPS collars, dogs can range at greater distances from hunters, who no longer have to keep them within sight or earshot.  More dogs and less control means greater harm to wildlife, not only to the wild animals hunters are permitted to pursue with dogs, which includes deer and feral pigs, but also to the wild animals whom hunters are forbidden to hunt with dogs, like bear and bobcats.

Indeed, on state and federal lands throughout California, companion dogs are restricted to leashes, and in some cases prohibited entirely.  Those restrictions are based on the recognition that dogs harass and disrupt wildlife.  Beyond those site-specific restrictions, California law, like the federal Endangered Species Act, broadly prohibits any activity that “harasses” wildlife.  State regulation, like its federal counterpart, defines harassment to mean activity that “disrupts an animal’s normal behavior patterns, which includes, but is not limited to, breeding, feeding or sheltering.”  In other words, a person need not kill or even physically injure wildlife to break the laws protecting them: they need only disrupt a wild animal’s normal behavior.

In allowing hunting dogs to tear through the wild spaces of California beyond the control of hunters, the Fish & Game Commission has effectively authorized hunters to harass wildlife, which the law prohibits.  Our lawsuit petitions the California court system to prevent the Commission from allowing GPS collars until it has properly examined the unlawful toll its decision will have on the welfare of our State’s wildlife heritage.