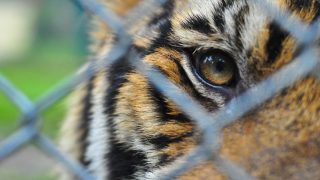 SACRAMENTO, CA — The Animal Legal Defense Fund, the nation’s leading legal advocacy organization for animals, has requested that the U.S. Department of Agriculture (USDA) open an investigation of the Barry Kirshner Wildlife Foundation, a notorious roadside zoo located in Oroville, California. Less than a year ago the USDA ordered a fee of $5,464 from the zoo for numerous violations of the Animal Welfare Act (AWA) relating to public handling of big cats and lack of appropriate veterinary care. While the zoo paid the fine, new evidence suggests that the establishment is still flagrantly disregarding bare minimum AWA standards meant to keep animals and the public safe.

The Animal Legal Defense Fund’s request to the USDA includes allegations that the Barry Kirshner Wildlife Foundation persists in housing and using big cats for public contact sessions in ways that violate numerous AWA regulations. On at least one occasion, a visitor to the zoo paid for a photo opportunity with a juvenile lion well beyond the legal age limit for contact with the public. The visitor also noted that the cat smelled putrid, was clearly distressed, and had fur caked in a black, sludgy substance. Additionally, the cat had obvious patches of missing fur along the head, nose, and forelimbs.

“The Animal Welfare Act is supposed to protect animals from abuse and neglect, but it also serves to protect the public from dangerous interactions with captive animals like big cats,” Animal Legal Defense Fund Executive Director Stephen Wells. “The reports about conditions for animals at this roadside zoo are concerning enough, but the fact that it has just been fined for multiple AWA violations means the Kirshner zoo is simply not taking the law seriously.”

This roadside zoo is endangering both big cats and people with its continued violations of the AWA. The Animal Legal Defense Fund’s request asks that the USDA perform an immediate targeted inspection of the facility and take all necessary enforcement actions against this chronic big cat exploiter, including potentially revoking its license.