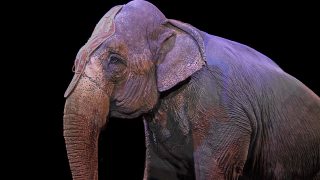 Ringling to Phase Out Circus Elephants!

“We’re not going to come… without our elephants,” said Stephen Payne, Ringling Bros.’ vice president of corporate communications, when the City of Los Angeles passed a ban on firepoker-like bullhooks that circuses use to dominate and control elephants. As public awareness has grown about the circus’ barbaric bullhook abuse, forcible separation of mothers and infant elephants, confinement of elephants in cramped boxcars for up to 100 hours at a time, nearly interminable chaining at performance venues, and use of elephants who are sick or suffering from painful conditions like arthritis, dozens of jurisdictions across the United States have banned the use of bullhooks or the use of exotic animals in traveling acts all together. Despite the clear shift in public opinion about the use of elephants and other animals in entertainment acts, Ringling has remained unyielding in its position that it will not end its use of elephants. Until today.

We have all hoped to see the elephants have their own Blackfish moment. And that moment appears to have arrived. On March 5, 2015, we all woke up to historic news that may not have been believable had it not been reported on virtually every major news network across the United States: Ringling Bros. announced that it is finally eliminating the use of elephants from its circus by 2018. In this earthshattering about-face maneuver, Ken Feld, the CEO of Ringling’s parent company, acknowledged the role that shifting public opinion and legislative efforts to ban bullhooks has played, and the circus’ need to adapt. While some groups have been critical of the efficacy of bullhook bans, this announcement by Ringling Bros. is a clear indication that the bans passed in Oakland, Los Angeles, Fulton County, and other localities across the U.S. have indeed influenced the $2 billion entertainment corporation’s decision to adapt and drop the elephant act.

This is a monumental step in the right direction, but our work on behalf of exotic animals in entertainment is not over yet. While we at Animal Legal Defense Fund are celebrating this historic victory for elephants, our efforts to pass legislation that will protect elephants, tigers, and other animals who are exploited in circuses and traveling acts will not end until all animal acts are a relic of the past.