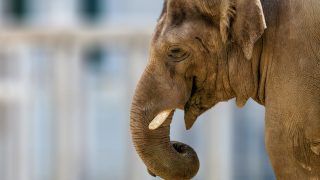 Putting the Spin on Flying Elephants to Omaha

Three American zoos have orchestrated a fairly tricky sleight-of-hand to remove 18 African elephants from their native grasslands and plant them in expensive faux-habitat exhibits in the U.S.

The Dallas Zoo, the Sedgwick County Zoo in Wichita, Kansas, and the Henry Doorly Zoo in Omaha, Nebraska, committed to pay a “significant contribution”—$450,000—to Big Game Parks, a family-run organization that manages wildlife for the government of Swaziland in three of that nation’s protected areas. In exchange, each zoo will receive six elephants from Swaziland, transported first via 747, then in shipping crates on the backs of tractor-trailers to the zoos’ complexes in Dallas, Wichita, and Omaha.

The $450,000, however, is not technically a direct payment for taking possession of the elephants. The zoos describe the deal as a “contribution” to Big Game Parks and Swaziland’s black rhinoceros conservation efforts.

According to Big Game Parks, the nation’s protected areas are overcrowded with elephants and, because of this, endangered black rhinos are being pushed closer to extinction. To hear the zoos’ administrators tell it in the press, they “agreed to take ownership” of the elephants, practically as a favor to the elephants and to the poor, drought-ridden nation of Swaziland. In late September, news articles supportive of the importation ran in the largest newspapers in the zoos’ three cities, all touting the “win-win” nature of the transaction for the elephants and the rhinos.

Notably, as of September, the Sedgwick County Zoo in Wichita had raised $10.6 million for construction of a new elephant exhibit, of which half was contributed by the county government. The Henry Doorly Zoo in Omaha was in the final stages of constructing its $73 million African Grasslands project, including a $15 million elephant building. At that time, the Executive Director and CEO of the Doorly Zoo told the Omaha World-Herald, “When people come to a zoo like ours, they expect to see elephants.” And when for-profit zoos build multi-million dollar compounds, they expect a return on investment.

Swaziland is a poor country. Big Game Parks manages its wildlife with little if any government oversight. The organization has threatened to kill the 18 elephants if permits allowing their exportation are not issued. They do not point out that the entire population of fewer than 35 elephants occupies only small fenced portions of the reserves and poses no considerable threat to other wildlife. No evidence has been presented to show significant habitat competition with rhinos. Nor have they shown that they’ve made any significant efforts to move the elephants to protected areas elsewhere in Africa where they would not be subjected to incarceration or family destruction.

Big Game Parks stands to benefit financially from the transaction, as do the American zoos, but both parties know that the world increasingly sees the purchase and importation of African big game as morally repugnant, even if it’s not out-and-out illegal. Thus, the transaction is shaded as something other than a direct sale.

We know that elephants roam up to thirty miles a day in the wild. Female elephants stay with their families all their lives. They are highly intelligent, communicative, and have complex social structures that are critical to their welfare. We know that in captivity they grow depressed (indicated by abnormal stereotypic behaviors such as head bobbing and swaying) and have diminished life expectancies, although an elephant’s natural lifespan is similar to that of a human.

In zoos and circuses, however, captive elephants are frequently euthanized at an early age due to painful arthritis and other foot problems—conditions that are unique to unnatural and inappropriate captive settings. These zoo executives and their private partners in Swaziland are hoping we’ll forget those things. They’re hoping the people of Kansas will forget, too, and pay $13.95 to see elephants fresh out of Africa right off Interstate 235 in Wichita.

The Animal Legal Defense Fund has joined with dozens of scientists, conservation and animal advocacy organizations to stop this importation, and we hope you will join us and spread the word. The elephants, after all, don’t have the luxury of forgetting.