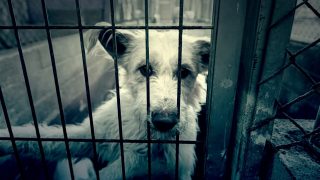 Currently, most states have no mandatory requirements for keeping those who are convicted of animal abuse crimes away from animals, following their convictions. This is despite the fact that offenders have demonstrated through their actions their utter disregard for the welfare of animals, and that the rate of recidivism for certain types of animal abuse, such as animal hoarding, is nearly 100%.

Having an animal in one’s life is a privilege, not a right – and with that privilege comes certain responsibilities, including the responsibility of providing adequate care and otherwise not abusing or neglecting the animal.

The Animal Legal Defense Fund’s Possession Ban model law provides another tool to help combat animal neglect and cruelty by mandating that those who are convicted of a violation of their state animal protection laws are prohibited from owning or having contact with animals for a set period of time, ranging from five years for a first misdemeanor offense up to the lifetime of the offender following a second felony offense.

Enacting a possession ban law in your state will help in the fight against animal neglect and cruelty by keeping offenders away from potential new animal victims, which would, for example, help stem the high rate of recidivism often associated with animal hoarding.

This proposal will also help reduce the huge economic toll which repeat offenders impose on their communities – hoarding cases in particular are very costly, often requiring the cooperation of several local agencies.

States that have enacted Possession Bans

However, not all laws are created equal—some of these state laws have gaping exceptions that swallow the rule.

For example, in California, Delaware, and Oregon, the possession ban might not apply if the convicted offender raises livestock and/or would suffer substantial economic hardship. In Nevada and New Hampshire, the court must impose a possession ban only if the defendant is convicted of bestiality—not any other animal abuse crime—and leaves the length of the ban entirely to the court’s discretion.

How You Can Help

Animal Advocates:
Know your state’s laws. Contact your state legislators today and ask them to support a possession ban for those who are convicted of animal neglect or cruelty.

Legislators:
For more information on the Animal Legal Defense Fund’s model law, or for assistance in drafting a possession ban law for your state, please download the following forms or contact legislation@aldf.org.