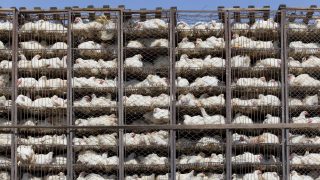 SAN FRANCISCO, CA. – The Animal Legal Defense Fund, the preeminent legal advocate for animals, released the first in a series of white papers providing policy recommendations to reduce our heightened risk from zoonotic diseases like COVID-19 and the next global pandemic, which need only a human-animal interaction to arise. The paper — COVID-19 and Animals — asserts that, even as the government mobilizes to limit the staggering impact of COVID-19, it is imperative it also address immediate and gradual changes to mitigate the ongoing risk from zoonotic disease outbreaks.

Live markets, where diverse live animals are sold and slaughtered on demand, originally received significant attention and criticism due to suspicion that COVID-19 originated in a live market in Wuhan, China — as SARS had originated in a similar market in 2002. Alternatively, the Animal Legal Defense Fund’s paper raises the alarm around the rate of zoonotic disease being produced in the industrial animal agriculture industry in the U.S.

Factory farms engage in many of the same risky practices as live markets, but on a scale orders of magnitude greater. Factory farming is already responsible for numerous zoonotic disease outbreaks, including the 1997 Bird Flu (H5N1) and the 2009 Swine Flu (H1N1). In April 2020, a highly pathogenic strain of Bird Flu (H7N3) — a strain which has caused illness in humans — was discovered in a turkey farm in South Carolina. It is simply a matter of time before a zoonotic disease outbreak has the combination of high level of contagion and high fatality rate. In that respect, COVID-19 is a dress rehearsal, with a fatality rate predicted to be under one percent (still fluctuating as cases progress) — compared to 60 percent of H1N1 and 90 percent of Ebola, another zoonotic disease, which have lower levels of contagion.

The legal and illegal wildlife trade, animal habitat loss and human encroachment, climate change, and recent regulatory obstruction by the federal government are also examined — as well as the failure of U.S. laws and regulatory oversight, including public health agencies, to prepare for a pandemic scientists and experts have predicted for decades — and the absence of any proactive measures.

The Animal Legal Defense Fund is grateful for its collaborating partners in the production of these recommendations, including Co-Directors Ryan Gordon and Vanessa Shakib of Advancing Law for Animals and Jackie Bowen, MS, MPH, of Clean Label Project.