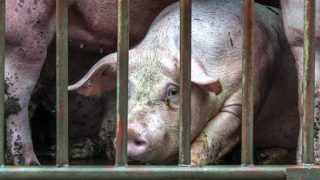 As the pandemic leads to reduced capacity at slaughterhouses, prolonged use of drug increases risk of harm

WASHINGTON, D.C. – Today the Animal Legal Defense Fund, Food Animal Concerns Trust, and the Center for Biological Diversity filed an emergency petition with the Food and Drug Administration (FDA) to suspend the agency’s approval of ractopamine — a drug used to rapidly grow muscle in cows and pigs but that also causes animals’ bodies to suffer tremors, lesions, and deterioration, elevates consumers’ heart rates, and harms the environment — as processing plants face shutdowns and delays due to the COVID-19 pandemic.

Ractopamine belongs to a class of drugs called beta-agonists, which shift the recipient animals’ dietary energy balance toward skeletal muscle growth as opposed to fat deposition. Producers often feed beta-agonists to animals during the final period of weight gain before slaughter to encourage a last-minute increase in muscle mass. Because the FDA has approved ractopamine only for the last stage of farmed animals’ lives, and because industrial meat production followed a precise schedule before the pandemic, the agency and the factory farm industry have paid scant attention to the animal suffering, human health risks, and environmental harms from continuing to administer ractopamine to animals being held on feedlots and factory farms.

“While factory farms and processing facilities across the country struggle to operate and pigs and cows are being killed without even reaching the slaughterhouse, it makes no sense that the FDA continue to allow use of a drug known to ravage animals’ bodies,” says Animal Legal Defense Fund Executive Director Stephen Wells.

Because producers administer pigs and cows ractopamine at levels that cause them to suffer psychological stress and rapidly deteriorate, the additional time spent on the drugs waiting at factory farms increases the likelihood of them suffering, dying, and being mistreated during handling in transit to slaughter. The slaughterhouse slowdowns and bottlenecks will increase the incidence and ways in which the animals’ bodies will tear, crack, and fall apart.

“Ractopamine is terrible for animals and also bad for consumers who are at risk from drug residues and foodborne pathogens,” according to Steve Roach, Food Safety Program Director of Food Animal Concerns Trust. “Because of the COVID-19 pandemic, some animals are staying on the farm longer with longer exposure to this drug, making these unacceptable risks to human and animal health even worse.”

“Dosing factory farmed animals with this dangerous muscle accelerant that’s banned in many countries has never been a good idea,” said Hannah Connor, an attorney at the Center for Biological Diversity. “But dosing hundreds of thousands of animals with ractopamine right before you kill and bury them in the middle of a pandemic is effectively dosing the environment with this hideous drug. We can’t let that happen.”

Beta-agonists have long been controversial. The FDA itself has reports from consumers and producers about adverse effects of ractopamine, including increased numbers of lameness and deaths in producers’ herds. Still, ractopamine usage has been estimated at 60-80 percent of all pigs raised for food in the U.S.