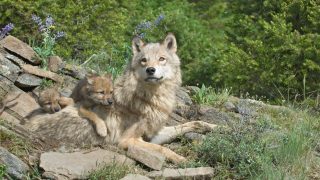 Ukiah, CA — In a major victory for opponents of animal cruelty and advocates of wildlife conservation, the Mendocino County Board of Supervisors has agreed to perform a full Environmental Impact Report (EIR) under the California Environmental Quality Act (CEQA) and immediately suspend its contract with a controversial wildlife killing agency. The agreement settles a lawsuit brought by a coalition of environmental and animal protection groups against Mendocino County.

Mendocino County’s contract with Wildlife Services authorized the program—at a cost of $144,000 to taxpayers—to kill animals without assessing the ecological impacts or considering alternatives.

Peer-reviewed research shows that the reckless slaughter of native predators causes broad ecological destruction. Indiscriminate methods used by Wildlife Services have also killed more than 50,000 non-target animals since 2000, including family pets, endangered condors, bald eagles, and millions of other birds. Studies show such mass killing, in addition to being cruel and inhumane, negatively impacts the biodiversity of ecosystems.

These lawsuits mark the advocacy groups’ first attempts to require a local government to comply with state law when entering into contracts with the federal agency.