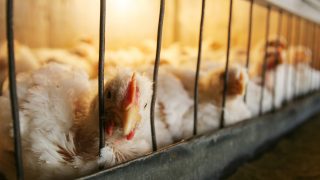 Advocates for animals, free speech and the environment take on secrecy at factory farms following victories in Utah, Idaho, Wyoming and Iowa

LITTLE ROCK, Ark. – The Animal Legal Defense Fund, Animal Equality, the Center for Biological Diversity and Food Chain Workers Alliance filed a lawsuit today in the U.S. District Court for the Eastern District of Arkansas challenging the constitutionality of the state’s Ag-Gag law, a law that prohibits undercover investigations that expose abuses at factory farms and other businesses throughout the state.

The plaintiffs are represented by the Public Justice Food Project and in-house attorneys for the organizations bringing the lawsuit.

Arkansas’ Ag-Gag law is far-reaching. Not only does the law allow agricultural businesses to sue whistleblowers who expose the cruel conditions animals endure in factory farms, the law also bans undercover investigations of virtually all private entities, including nursing homes and daycare centers. Whistleblowers could be liable for tens of thousands of dollars just for exposing the truth.

This is the eighth lawsuit challenging state Ag-Gag laws. Earlier lawsuits have resulted in courts striking down similar laws in Idaho, Utah, Wyoming and Iowa. Litigation remains ongoing in North Carolina, Kansas and Iowa, where state lawmakers recently passed a second Ag-Gag law after the first was struck down.

Today’s challenge is the first Ag-Gag case in which private entities are the defendants. One of the defendants is DeAnn Vaught, the lawmaker who sponsored the law. Arkansas legislators explained they hoped to prevent judicial review of the law by exclusively providing companies the right to enforce the law’s civil penalties.

Through this lawsuit, the public interest group plaintiffs seek a declaratory judgment that Arkansas’ Ag-Gag law is an unconstitutional restriction on free speech. They also seek to enjoin the defendants from using the law against the groups were they to investigate the defendants’ factory farms.

“Undercover investigations are a valuable tool in exposing the cruel conditions for animals in factory farms — and federal courts have already ruled they are protected under the First Amendment,” says Animal Legal Defense Fund Executive Director Stephen Wells. “Transparency is critical for protecting animals, workers, food safety and the environment. Moreover, it’s a waste of public money for states to pass and defend these laws.”

“Having seen our success in continually striking down these laws that criminalize or inhibit undercover investigations at factory farms and other facilities, Arkansas drafted this law with the goal of preventing courts from stopping the state’s unconstitutional conduct and thereby expand their unlawful chill on free speech,” said Public Justice Food Project Senior Attorney David Muraskin. “The First Amendment is still on our side, and we expect this law to fall as well.”

The ability to investigate, document and publicize corporate agriculture’s abuses is imperative to the well-being of workers and animals across the nation, and to public health and safety. Factory farms want to keep their cruel practices hidden from the public. But the public deserves the truth about the billions of animals suffering on industrial farms, including the working conditions that produce lifelong crippling injuries, and the environmental pollution that is endangering species and degrading air and water quality.

Undercover investigations have revealed severe animal abuse on factory farms — animals subjected to horrific violence, psychological and mental anguish, and painful, tortuous deaths. These investigations have exposed standard industry practices like line speeds that move so fast workers are splashed with contaminants and regularly develop repetitive stress injuries. The investigations have also revealed the confinement of pregnant and nursing pigs in crates too small for them to turn around, the removal of horns and tails from animals without anesthesia, and sick and downed cows dragged on the ground before they are slaughtered for lunchmeat.

The complaint is available upon request.