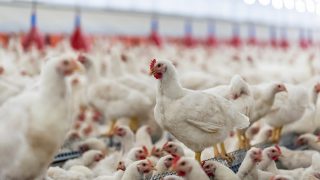 Arkansas – The Animal Legal Defense Fund is appalled by the passage of an Ag-Gag bill in Arkansas, which prohibits undercover investigations that expose abuses at factory farms and other businesses throughout the state.

Governor Asa Hutchinson signed House Bill 1665 into law on March 23, 2017, just one month after the bill’s introduction, despite an outcry from the citizens of Arkansas and Americans at large. This law is an affront to the free speech rights enshrined in the U.S. Constitution, and the state should prepare to answer for that in court.

Arkansas’ Ag-Gag law is designed to deter whistleblowers, journalists and undercover investigators from publicizing information, including conditions for animals on factory farms. It also bans undercover investigations of virtually all private entities, including restaurants and daycare centers, and allows employers to sue whistleblowers directly, who could be liable for tens of thousands of dollars just for telling the truth.