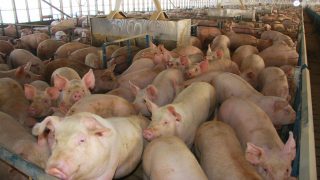 A federal judge ruled that a lawsuit brought in February 2020 by seven animal protection groups against the U.S. Department of Agriculture (USDA) can move forward.

ROCHESTER, N.Y. — A federal judge ruled that a lawsuit brought in February 2020 by seven animal protection groups against the U.S. Department of Agriculture (USDA) can move forward.

The suit challenges the agency’s longstanding failure to protect downed pigs — those who are too sick or injured to walk to their deaths — and humans who are exposed to increased risks of numerous drug-resistant and potentially fatal diseases from these animals.

Every year, more than half a million pigs arrive at U.S. slaughterhouses unable to walk, according to industry estimates.

Plaintiffs in the lawsuit argue that the USDA has illegally disregarded a 2002 Congressional mandate that it study and report on downed livestock and, based on that report, regulate those animals as needed. They also challenge the agency’s denial of their 2014 petition seeking a ban on the slaughter of downed pigs.

Despite voluminous evidence that these animals are at an increased risk of inhumane handling because they are unable to walk — including dragging, kicking, punching and excessive electroshocking — and that they pose serious human health risks, the USDA continues to allow them to be slaughtered for food.

An industry study found that more than half of all downed pigs tested were infected with H1N1 swine flu. The Centers for Disease Control and Prevention estimates that an H1N1 outbreak in 2008-2009 infected more than 60 million Americans, killing more than 12,000. A recent study identified a new H1N1 swine flu strain that, the study authors warn, has “all the essential hallmarks of a candidate pandemic virus.”

In addition to H1N1, which is airborne, downed pigs also transmit a host of potentially fatal and often drug-resistant foodborne diseases including Campylobacter, E. coli, Listeria, Salmonella, and Yersinia enterocolitica.

In denying the USDA’s motion to dismiss the lawsuit, U.S. District Court Judge for the Western District of New York Elizabeth A. Wolford rejected the agency’s argument that the plaintiff animal protection groups lack legal standing to challenge the USDA’s failings.

Pamela Hart, Executive Director of the Center for Animal Law Studies at Lewis & Clark Law School, where the Animal Law Litigation Clinic represents the plaintiffs, said, “As the lawsuit alleges, downed pigs are often left to languish for prolonged periods without veterinary care, painkillers, and food, and then violently forced to their deaths. We are glad we can now move forward with holding the agency accountable for this suffering and seeking a court order finally putting an end to it.”