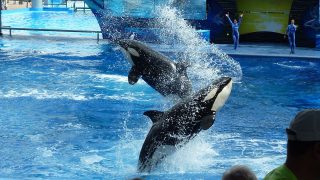 Is SeaWorld Secretly Fighting to Protect an Orca Breeding Program?

For years the Animal Legal Defense Fund has been fighting for justice for orcas. From Lolita and  SeaWorld San Diego to our new campaign to end captive breeding and use of captive orcas for entertainment purposes, we’re committed to securing these animals the protections they deserve. As the only nonprofit with a focus on protecting animals through the legal system, we’re proud that our successes have such impact, but lawsuits and legislation don’t happen overnight, and sometimes things don’t go the way we expect. This week, a Politico article gave readers a behind-the-scenes look at the early stages of proposing a bill—specifically, our Florida Orca Protection Act.

Why would Florida House Representative Thad Altman release a letter calling for a hearing on the Florida Protection Orca Act, then suddenly backtrack, saying we “don’t have enough science” to support an orca breeding ban? Politico seems to have reason to think SeaWorld played a role in Rep. Altman’s change of heart.

Altman blames staff after request for workshop on SeaWorld captive breeding policy
In the letter, Altman seemed to sympathize with those with concerns.
POLITICO.COM

The Florida Orca Protection Act is a commonsense way to codify SeaWorld’s corporate promise to end its captive breeding program. The company’s ownership could change hands at any time, especially given that a company in China recently bought a 21% share in SeaWorld. Whether or not orcas get the protections they deserve shouldn’t hinge on who owns the most shares in a company.

We don’t know exactly what path this bill will take on its way to becoming law, but we can assure you we will fight to push it forward, no matter what.